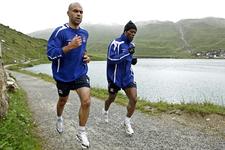 Lyon have just started the 2007-2008 season...The group has changed..and the changes are not over...The Peace Cup will occupy OL for around 10 days...
Alain Perrin and Christophe Galtier were named at the end of the 2006-2007season. Tiago and Abidal have already left the club. Cacapa is no longer at OL. Uncertainties still exist surrounding the futures of Wiltord, Diarra, Berthod and Malouda. The six times French championsleave for Tignes for their traditional pre season training camp. During the camp Berthod and Malouda leave for Monaco Chelsea respectively. When they come back down from altitude, the group stops off at Alberville for a game against Lille, a 3 – 3 draw. The new recruits Keita, Bodmer and Belhadj are present. Grosso wil sign before the club leave for Korea.

Wednesday the 11th of July , departure for the third edition of the Peace Cup. The arrival takes place at the end of the day and is followed by run along the oceanfront in order to stretch the legs out. The first match is a success 2-0 on the 13th against Shimzu, with goals from Benzema and Mounier, on the pitch of the club Busan. OL start the competition well.

In their group, they will come up against Reading and River Plate. Grosso and Keita will take things easy because of slight injuries. Nino Wiltord did not come with the group. It would appear that he is in discussions to leave the club, but should be arriving in Korea soon. Juninho, injured, did not come on the trip. Not a great start to life between Alain Perrin and the group.

[IMG35619#R]The squad leave Busan menaced by a typhoon and take up quarters in Seoul. Alou Diarra, barely arrived, packs up his bags. He has reached an agreement with Bordeaux. The big midfielder wanted guarantees of playing time. Sébastien Squillaci injured during the first game also left for France, but in his case for treatment. All these little upsets will not pertube Coupet and his teammates…
Facebook
Tweet
Forum