Jean-Michel Aulas : « No decision by default» 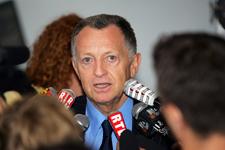 On the side of the game between Al-Shabab and Olympique Lyonnais (0 – 2), in Dubai,Jean-Michel Aulas talks about the incertitudes surrounding the name of OL's coach for next season.
« It’s a strange situation », admitted OL’s president who also reminded everyone that the decision to keep, or not, Alain Perrin as coach would be taken by the Board on Monday the 2nd of June: « Whichever way it goes, there will be unhappy people and the decision will be criticised : if we change our coach, some will say that it is unfair as this has been the most succesfulm season in the club’s history; if we stay as we are then we will have to changesome of the current staff who will feel let down as they have more than contributed to the 15 titles won by OL in the last 8 years ».

OL’s president did however concede that Bernard Lacombe had, yesterday, met with Wanderlei Luxembourgo : « It went well ». Could the arrival of the Brazilian cause Marcelo (Kiremitdjian), current scout for OL, to join the technical staff? Jean-Michel Aulas doesn’t know but adds that Kiremitdjian has just passed his coaching badges.
What about Claude Puel, the rumour has been growing over the past few days? Without closing the door, he states that there « are other possibilities ». « We have to take our precautions concerning this subject , he adds. The quicker the decision the better for everyone. But we cannot act stupidly, we cannot make a decision by default. » The only certainty: « the decision will be taken with the Champions League as objective, much more so than in the past. »
Facebook
Tweet
Forum