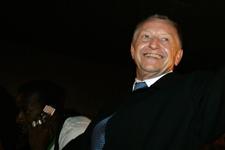 The president Jean-Michel Aulas spent a good amount of time yesterday on the telephone with Hugo Lloris's father : « It's been complicated »…but « he is coming »… « nominally as first choice keeper »… « Pjanic should follow him »
Hugo Lloris
« It’s a complicated affair, especially when you consider the distance between us at the moment as we are in Dubai. I spent much of yesterday speaking to Hugo’s father to get things moving along. Joël Bats also intervened. While we were speaking to him, Hugo’s father confirmed his son’s preference for Lyon. This afternoon we’ll be speaking to Hugo and his club, notably Maurice Cohen their president, who has been very important as far as the dossier is concerned. There should be a press conference in Nice in a few hours to announce the good news. We have to respect everyone until he signs, but things are looking good, for us not for the other clubs. »

AC Milan and Tottenham
« It has been complicated. Not that he didn’t want to come to us, but when you have AC Milan chasing you and Tottenham throwing money at you it’s difficult, it’s a very important decision for a young player and his family. Hugo managed, I believe, to see our capacity of turning young talents into full internationals. There is also the question of his status at OL which is quite clear: he will be coming, I hope, as first choice keeper. Rémy Vercoutre has signed a two year contract extension but there is a « gentleman’s agreement » to allow Hugo to play and be first choice in the side. These are important decisions. Neither AC Milan nor Tottenham will be playing in the Champions League next season, while OL will be playing a ninth consecutive time in the competition and we are first seeds. That gives us an opportunity of building a great side, for the Champions League as well. I think this is the challenge that has interested Hugo. »

Miralem Pjanic
«Metz’s final decision concerning Pjanic should come to us in the next few hours. In this case as well, we were up against some big clubs, mostly German this time around. Some details still have to be ironed out. In theory things should be confirmed quite soon. »
Facebook
Tweet
Forum