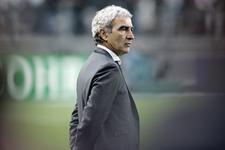 Coupet, Clerc, Boumsong, Squillaci, Toulalan, Govou and Benzema are on the list of twenty three players in the French squad for the Euro 2008. Hatem Ben Arfa is one of the seven unfortunates who were left out.
[IMG41392#L]M. Landreau, M. Flamini, A. Diarra, D. Cissé, P. Mexès, H. Ben Arfa and J. Escudé are the seven unfortunates who were left out of Raymond Domenech's squad list. These seven players will, however, be on call until the 9th of June in case of any injuries in the squad.

[IMG41390#L]OL's defender, Patrick Müller, has been named in the list of 23 for the Swiss national team for the Euro by the coach Kobi Kuhn.
Facebook
Tweet
Forum