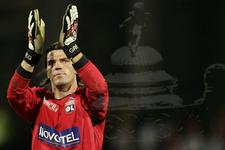 The stats… and other information surrounding the Final of the Coupe de France which will be played on Saturday between OL and PSG…
The 2 teams have played against each other once in this competition: in the ¼ final of 1976, PSG 1 OL 1 (Lacombe) and OL 2 PSG 0 (Chiesa, Lacombe).

22 have been used by Alain Perrin. Coupet is the only one to have played all 450 minutes.

211th match on Saturday in the Coupe de France for the seven times French champions.

96 different opponents in 211 matches for OL.

1 player in the groups has already lifted the Coupe de France : Jean-Alain Boumsong in 2003 against PSG 2 - 1 scoring the winning goal in the 89th minute.

Alain Perrin won the Coupe de France in 2007 with Sochaux. He can join Pouliquen who has won it twice in a row with two different teams : Strasbourg in 2001 & Lorient in 2002.
Videos