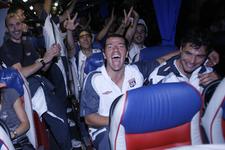 Scenes of joy well before the final whistle...before the trophy ceremony...in the dressing room....on the bus...
Already during the game, OL’s bench had made its joy plain to be seen. Robert Duverne even played conductor to the OL supporters. At the final whistle, embraces, radiant smiles, and a race to the 1 500 supporters piled into a corner of the ground. Juni,Coupet and Govou showing of the number 7. The President Jean-Michel Aulas, Bernard Lacombe went from one congratulation to another. Certain players ended up bare foot and bare chested having given away their gear after taking the title.

The champions of France lingered on the field, after having received their trophy from president Thiriez. The champions hymn was played and the chants from the OL fans continued. The traditional group photos, a lap of honour and then back to the changing rooms where the champagne was flowing. President Jean-Michel Aulas announced that they would all get cars if they achieved the Double. Plenty of drinks tipped over, a real shower … autographs to be signed for the numerous supporters before jumping in the bus that would take them to the airport at Auxerre. Over a number of kilometres, the supporters along the roadside celebrated the champions. The police escort facilitated the exit from the town.

A festival of sounds that was pretty much audible with a talented DJ in Rémy Vercoutre, backed up by an exceptional Fabio Grosso who had the whole Lyon group applauding him. We’re still wondering how the Italians vocal cords managed to hold up! The bus seemd all shaken up by so much joy. Shivers were going down our spines. The Trophy, was sitting just behind the front window of the bus, which drove directly out onto the tarmac of the airport. The plane was waiting for the players; another plane filled up with VIP’s, directors, Rémi Garde, Marcelo… and the player’s wives. The wives who would make themselves heard just like « their men ».

At 1h 30, the planes landed at Bron. Jean-Michel Aulas who had arrived first was waiting for the two planes. He announced a party at Sonny’s. At 2h00, the buses arrived at Gerland where the supporters were waiting for their Champions. The night was going to be long. Rest on Sunday and Monday. The players will have the time to have fun and recuperate before this last week of work that will lead them to the Stade de France.

[IMG43081#C]
Karim Benzema thanks Bernard Lacombe / Benzema and Delgado in front of their public.

[IMG43083#C]
Lyon’s supporters in front of the Champions

[IMG43084#C]
Everyone on top of the captain "Juninho" before going to lift the trophy.

[IMG43087#C]
Benzema and Govou do their lap of honour with the trophy / The president kisses the trophy.

[IMG43088#C]
Kader Keita and his first title as champion of France / The youngsters Anthony Mounier and Romain Beynié.

[IMG43089#C]
In the dressing room, Cris cracks open the champagne before Crosas and Delgado.

[IMG43090#C]
The party continues in the players coach