Benzema... Just a few days before the game between Auxerre and OL. 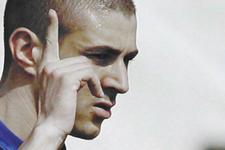 Karim Benzema is proud to have won the title of League’s Player of the Year for the 2007/2008 season. He used our microphone to thank his teammates, the staff and everyone involved with the club as for him, he owes this title « everyone. »

He knows that the best way to cap this all off would be to go on and do the Double with OL, a performance that the club from Lyon have never achieved. But before thinking about the Coupe de France, there is the final League game of the season against Auxerre on Saturday. The title will be decided at the end of these 90 minutes, « so close » :  « I don’t want to say that it is in our pocket , but we will be going to Auxerre to get a result. We know that this is a gala match for them . »
Karim has a large amount of supporters waiting for him to finish his interview in order to getautographs and photos. He continues the interview  : « Auxerre will be playing without any pressure . They have nothing to lose and are safe. Their supporters Will be pushing them to win. »
The young forward, current top goalscorer in the League can’t wait for this last League game of the season . He continues speaking of this last rendez-vous : «  Auxerre will be wanting to prove that they can beat Lyon. Us, we must not lose. We’re not even thinking about a draw, just the victory . Bordeaux go to Lens and will be giving everything they have in order to beat the team from the north . They will be playing with the hope that we slip up . »

^He speaks about the atmosphere within the group  : « There is a lot of joy in this group. We have a good laugh. We have an objective  first of all: the title. »
The other objective that is close to his heart, the Coupe de France : « we’ll do everything to win it and do a Double that Olympique Lyonnais have never done before. »

Before finishing up and going off to profit from the sun, we talk about his season record  : « In other years I was mostly on the bench, the joker ! This year I have really played a full campaign.  Top scorer ? I’m not playing for it, I’m playing for the team  ; I’m not chasing tis title . For me, the most important thing is to win the League title . »
The interview finishes with a pirouette and he is gone smiling: «  If Grégory Coupet scores the goal that wins the title, I’d be very proud. »