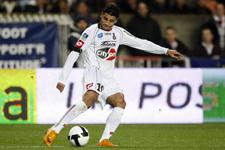 Sandy Paillot has participated in Grenoble's promotion to the L1, even if he was absent for the game against Châteauroux... Fabio Santos is in the quarter-final of the Copa Libertadores...
12 points from 3rd place, a few weeks ago, Grenoble have pulled off an exploit by catching and overtaking Troyes to get onto the podium and refind the L1 more than 40 years after their last appearence at that level. Injured against Boulogne after only 20 minutes of play, Sandy Paillot was not on the picth of the Stade des Alpes against Châteauroux. The 0 - 0 draw and Troyes defeat against Sedan sent the Grenoble group into League 1. Sandy brought his implication to the Grenoble team over the last few weeks. Grenoble's defence being the best in L2. Bravo to the young Lyon player.

Milan Baros did not play for Portsmouth against Fulham. Ederson scored one of Nice's two goals in their victory over Valenciennes firing in a lovely left-footed shot. He then turned creater, passing the ball in for the goal scored by Koné. He was given the best mark of the match by the sports paper l'Equipe.

Loïc Rémy was in the starting line-up for the first time since the final of the Coupe de la Ligue. Injured right at the start of the game at the Stade de France, he returned last week, coming on at the end of the game. Unfortunately Lens lost to Lille 2 - 1. Loïc was replaced by Monnet-Paquet.

Fabio Santos has two competitions going on at the moment. The Brazilian League has just started. Fabio was in the starting line-up against Gremio. The Lyon man played the whole 90 minutes of his teams 1-0 defeat. In the Copa Libertadores, the midfielder came on during the game in the place of Borges. A 2-0 success for Sao Paulo in the qualification for the quarter-finals. Sao Paulo will play Fluminense at home on the 14th of May before the return leg on the 21st of the month.
Facebook
Tweet
Forum