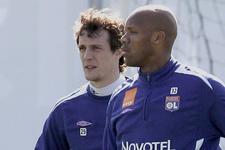 Even if he admits that « at the moment, OL’s games are laborious », the former Juventus player remains confident that OL will take their seventh title in a row. « It’s up to us to play and do the job , he declares. If we do things right, we will be champions. We’re well aware of the pressure that Bordeaux are putting on us but we must not get preoccupied by them. (…) We’ll have to fight right to the end, but we still have a two point lead. Our destiny is in our hands, or rather our feet . It’s up to us to do what we have too in order to be champions ». Meaning? « We can’t just keep saying it. We have to work hard, stand together and stay united, and hope that providence is on our side. We have to take each game as it comes as if we start speculating, or become pessimistic, it could have an impact on our performances ».

[IMG43060#R]As they are one step away from the final – a stage of the competition that OL have not reached since 1976 – and as it is followed by an important game against Nancy in the League on Saturday, OL would be well inspired to win their game on Wednesday against Sedan in the Coupe de France. « A qualification for the final of the Coupe de France would give us that extra bit of confidence , analyses the defender. We’re not against that at all ».
Videos