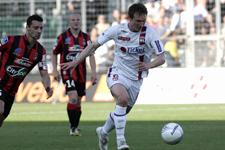 Alain Perrin : Nice have one of the best defences in the League and we saw why. Their defnce really caused us problems. We created a number of chances but didn’t manage to put them away. We know it won’t be easy next week against Nancy. We’ll wait just wit for the result of the game between Marseille and Bordeaux to know what is left for us to do. Now we’ll be concentrating on Wednesday’s game in the semi-final of the Coupe de France which is not negligeable.

Christophe Galtier : The heat made both teams suffer. The first half had a lot of rhythm and chances on both sides. We lacked some luck witrh our set pieces. We put in a good first half with a lot of good intentions, a lot of running and hard work. The second half was a lot harder and we suffered physically because of the heat. We had chances but made bad decisions during our build up play. It’s still a good point for us even if we aren’t satisfied with our performance as we knew that if we had won we had a good chance of finishing as champions. We didn’t lose and that’s a good thing.

Jean-Alain Boumsong : I’d played as full back before but it was on the right hand side, I started my career at Le Havre as right back. I needed a few minutes to adapt, but the communication with my teammates was good, that allowed me to put in a decent performance. Even if we didn’t manage to win this point will be valuable to us at the end of the season. Now we have to take the points from our home game and get something from the game at Auxerre.

Juninho : There was not a great rhythm to the match. The teams could not speed the game up because of the heat. All the chances were dangerous. We hit the bar but they had chances on the break as well. We are a little disappointed as we wanted to win and put a bit of distance between us and Bordeaux, but this point is still a good result for us. We know that the League is nnot finished just yet. Bordeaux have the chance to reduce the gap between us and them tomorrow. If they win, it’s proof that they deserve to be in with chance of winning the League as it is not easy to go and win away to Marseille. I hope Marseille put in a good performance, like they did against us. We’ve had a good week, team spirit is good. We’ve had proof that the group can live well together. We’ve learnt to assume our responsabilities, which is important.

Kim Källström : I took two knocks on the ankle. After the second,I couldn’t continue so it was better that I went off. There was a lot at stake tonight: they wanted to prove they could beat Lyon and we were playing for the title. There were a lot of duels on the pitch. Tomorrow we will see if it is a good point taken for us, but playing here is always difficult. Both teams created chances but i think that we controlled the match.
Videos