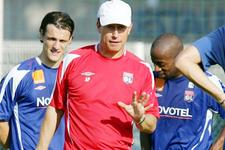 The press conference took place in Evian this Thursday...the training camp, Nice and the end of the season were at the centre of the questions posed by the media who had turned up in their droves...
[IMG43054#L]Alain Perrin

A word about the training camp ?
« We’ve had a good time together. There has been fun on and off the field. A great group life. This training camp was not there for us to discover anything, it’s for us to get ready for the final kick on towards the end of the season. We’ll see how things go on Saturday against Nice. We’re preparing for the three matches we have coming up. I’ve been on training camps like this with Sochaux, I like these recuperation sessions late on in the season ».

Nice ?
« They are still a good team who like to pull off great results like the one against Bordeaux. They won’t make it easy for us, they have their honour».

Will Jérémy Toulalan be back against Nice ?
«It’s 50/50. If the game was today he couldn’t play. He’s not at 100% yet. Afterwards it depends on him and his cpacity to get over the pain. We’ll make our decision the day before the game ».

How will you make up for the absences of Fabio Grosso and Anthony Réveillère ?
« We didn’t wait for them to be unavailable to have a solution for replacing the left back, especially since Nadir Belhadj left. Kim Källström will probably fill in, but that depends on whether or not Jérémy Toulalan plays ».

The Coupe de France, your future ?
« I’m preparing for the match against Nice. Each thing in turn. »

How is the group ?
« Physically, we have recuperated well over this week. We’re ready for the end of the season and the five games we have, hopefully, left to play. Physically and mentally we are at 100%. The atmosphere? There are no problems. On the field, everyone has the same desires ».

What have OL missed this season ?
« We haven’t been as consistent as we once were. But despite that we are on course in the League and the Coupe de France. If we manage the Double it would be fantastic. At a European level, OL have continued their progress gradually without being at the level of the 2 finalists. Against Manchester, we missed an opportunity at home. Obviously you can talk about the physical levels not being as good, but football isn’t just about that. Look at Barcelona… »

Are you thinking about the European Championships ?
« Yes, obviously, especially as we are close to Switzerland here. It’s a dream to be present for the Euro, I really hope I’ll be there in June ».

How is the training camp going ?
« Very well. The surroundings are fantastic. We’re working together, having fun together and we have recuperated with the rest, the treatment we’ve had in the spa and the traing sessions cooked up by the staff. It’s going to be good for us ».

How do you see the end of the season going ?
« We’re in a decisive period. Let’s worry about us and play with desire, a determination to win like we showed in the second half of the game against Caen. Will we be Champions after the game against Nice? I don’t know, but we will have a better idea after the game anyway. We are top of the League with a 4 point lead over Bordeaux. No stress. A win over Nice would show we mean business and would send us well on our way.»

The Coupe de France ?
« No boycott, it’s important, even if our priority is still the League. But we are too close to the Final to give up on anything ».

Next season ?
« I hope we’ll have a great team in order to win the Champions League ».

How are you dealing with you notoriety ?
« Well. It's important to be available for the youngsters who like who I am. I was young as well and I’ve a little brother. I enjoy spending time with them ».