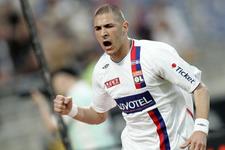 Karim Benzema has reached 30 goals this season in the game between OL and Caen...
19 goals in the League, 6 in the Coupe de France, 4 in the Champions League and 1 in the Coupe de la Ligue... adds up to the grand total of 30. 30 like 30 goals scored in an OL shirt by Lyon’s striker . 30 of the 95 goals scored by the six times French champions in 50 official games.

He leads the first division scoring charts with 19 goals. 19 goals from 95 shots, in other words, a goal every 5 shots!

Against Caen he put away his2nd direct free kick after the one scored against St-Etienne. 2 free kicks that gave OL two draws.

And he finally scored, in the League, at the Virage Nord end of the ground. He hadn’t managed that this season apart from in the Coupe de France against Metz and in the Champions League in the past.