Memories of OM - OL in the League 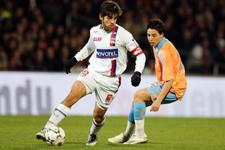 Some memories from the games between OM and OL over the last six years...OL have brought back 3 draws and 3 victories from the Stade Vélodrome...
During the 2001-2002 season, the two teams draw the game 0 - 0. Not a great match. Eric Carrière played his first game for Lyon, in the starting 11. Luyindula comes on for his debut in the 71st minute replacing Née. Peguy had pretty much the only chance of the game right at the death… hitting the post of Runje's goal.

During the 2002-2003 season, another draw 1 - 1. Juninho was injured early on (27th minute) and was replaced by Laville. Govou had scored OL's goal after a corner from « Juni ». Coupet pulled off 3 decisive saves.

During the 2005-2006 season, a free kick from Taiwo, an equaliser from Carew. Great performances from Réveillère and Coupet. A 1 - 1 draw.

During the 2006-2007 season, OL were on a different planet to their opponents! Two goals from Juninho including a freekick. An unbelieveable goal from Benzema. Fred's injury. Bamogo's offside goal. Vercoutre's great save. The leader destroyed the second placed team, building up an 8 point lead after only 10 games…
Facebook
Tweet
Forum