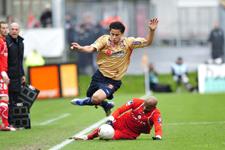 Reactions after the game between Valenciennes and OL.
Abdeslam Ouaddou (speaking to Canal +) : We played well. As is always the case against Lyon, we had the impression that we were playing well, the games are always open, they let you play. We can be frustrated as we could have got something out of the game. It’s a shame. But we have to applaud Lyon, they have a great team. OL deserve to be champions. Winning two games in a row at home is never easy, especially against two top teams.

Christophe Galtier : The main thing is we have a great victory under our belts. We knew it was going to be difficult, complicated, a tough game, we knew all about the qualities and the virtues of this team. We knew we had to get something out of the game to consolidate our lead. Valenciennes really kept us out of the game for at least 30 minutes tonight, the were really up for the game. The first half was really hard. In the second we showed a whole other side, we were much more sure of our ability and were in control of the game. We put in a really good performance in the second half.

Grégory Coupet : We knew they were waiting for us, that we had to be ready and that it would be difficult. We have two games in a row on the road. It was important for us to take 3 points from one of the two games. Now we will go to Marseille with the ambition of taking all 6 : it would be fanatstic. Going to the Vélodrome is always great. We are heading there calmly as it’s difficult to win here. We want to keep going on as we have been. It’s great for me to rediscover my sensations, the speed of execution and to feel capable of getting into the fight. It isn’t just good for me but for my defenders as well. As far as the referees are concerned, I wouldn’t want to be in their position. Taking decisions at the moment is very delicate. Players make mistakes, miscontrol the ball. A referee can make mistakes as well. We have to remember they are only human.
Videos