Fabio Grosso : "This season can be incredible" 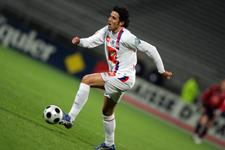 In Elche on Wednesday, David Villa’s Spain put an end to a run of seven games without defeat (6 wins & 1 draw),in all competitions, for the Italian national team. « We didn’t deserve to lose » declared Roberto Donadoni at the final whistle. « Even if it wasn’t a good result for us, we’re happy with the match , analysed, Fabio Grosso, who played all 90 minutes of the game. Personally and for the team in general, things went well . » A convincing performance, the OL defender has , even if he says he is not thinking about it, scored some points with the coach before the Euro 2008 which starts in just over 2 months in Austria and Switzerland. « We’re not talking about the Euro with the guys at OL yet , he confides. It’s too soon. When the League and the Coupe de France are over, then we’ll start talking . »

After a week marked by international games, the League is now once again the centre of attention, with a trip to Valenciennes on Sunday. Despite their 9 point lead at the top of the table over Bordeaux, Lyon are not crying victory just yet. « We’re on a good run but we don’t consider that we can allow ourselves to let up or drop any points , notes Grosso. We know that, between the League and the Coupe de France, our season could be incredible, but we could also end up with a disaster on our hands. We are well aware that we must put in some good performances in order to accomplish something unbelievable for the club and for ourselves . »

On Sunday, OL will start, against Valenciennes - « a very strong team at home » according to Grosso – a short but decisive run of two consecutive games away from home (they visit Marseille on the 6th of April). As far as the Italian is concerned the principle difficulty is : « that away from home it is never easy as the opponents want to walk all over you. To go and get a good result, you have to show the same determination and spirit that you do at home . »

If Alain Perrin’s men continue the away form the showed against Lille (1 – 0) and Monaco (3 – 0), they will take a notable step towards a seventh title in a row. A short term perspective that the Italian refuses to entertain. « I’m not looking at the number of points we need to take , he says. We must win all of our games. We will only be champions when it is mathematically assured . If Bordeaux win all of their games, 75 points wouldn’t be enough for us . »
Facebook
Tweet
Forum