OL flying towards the title 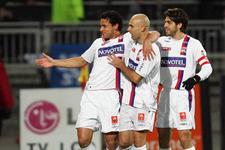 OL are heading towards a new title with only 8 games left in the 2007-2008 season, they have a 9 point lead over Bordeaux. Paris are in the relegation zone, 2 points from safety.
There are good sides in playing after everyone else. There is the fact that you know the result of your direct opponents and knowing that was all the more sweet for Lyon as Bordeaux had lost against Valenciennes (2-1).
Unlike the nine point advantage that OL now have on Bordeaux, there was also the eventual pressure on Paris and their opponents in the relegation battle. The bad news in all this? It came from Marseille where Sochaux won the game, leaving Paris in the relegation zone.

The club from the capital had no other choice than to bring something back from their trip to Gerland and their hopes were given a lift just before half time …
The first half started off with a whole load of chances for both sides : Squillaci’s header missed the target (2’) ; Fabio Grosso tried on his own hitting 2 shots before Fred headed in the Italians second shot opening the score (9’). It was the Brazilian’s 5th goal of the season.

Just after that, Yepes, fired in an effort but was unable to get his shot on target (10’) ; Chantôme was stopped by Coupet (15’) ; Benzema, twice, couldn’t get the ball sufficiently on target (16’ ; 22’). Chantôme and then Bourillon came up against Grosso and Coupet, who stopped them equalising (33’) ; At the other end of the field, Keita tried to lob Landreau but just wasn’t accurate enough (34’).

Trampled on by Camara, Karim Benzema had to leave the field and was replaced by Sidney Govou (35’). Not long after, Fréderico Chaves Guedes doubled the lead after an inch perfect pass from Mathieu Bodmer. His control in between Camara and Ceara allowed hilm to break one on one against Mickaël Landreau. The rest was just poetry. OL were in a recital. The supporters were singing. Mathieu Bodmer playing the orchestra conductor put in yet another perfect pass which Govou volleyed, but was unable to hit the target. But OL went into the dressing room at half time on a bad note, as Camara headed in a Rothen corner. « Parisian » hope had been born.

That hope continued to grow after the break when Mr Kalt gave them a dubious penalty. Rothen stepped up to score (52’).
The ball then started flying from one end of the field to another. Cris twice came to his team’s rescue. The first time cleanly, the second time, however, he was shown a yellow card (63’). Landreau saved his team from Kader Keita (64’) but conceded his third goal of the night when Sidney Govou scored, majestically played in by Mathieu Bodmer with a one touch pass (64') . The OL numebr 14 didn’t pose any questions and extended his team’s lead. Juninho finished off the scoring starting and finshing off the training ground move (71').

OL are heading towards the title, with 8 games left in the season they have a nine point lead over Bordeaux. Paris are in the relegation zone, two points away from safety.
Videos