Monaco, not a very welcoming place... 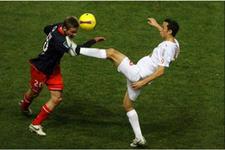 Juninho has not scored the slightest goal on this pitch.
Videos