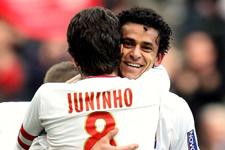 The least that we can say is that this victory over Lille at the Stade de France came at the right time. It had been over 3 months since OL’s last win away from home in the league (against Rennes on the 24th of November 2007, 2 – 0), even if these type of result will be necessary if they want to take a 7th French title in the Spring. This win puts 6 points between OL and Bordeaux, who play PSG tommorrow at 21h00. This will put them in good stead for the Champions League game away to Manchester, on Tuesday. Morale is high in the Lyon camp.
The win at Saint-Denis, continues the good run of 3 games for OL, the draw against Manchester (1 – 1) and the win at home to Metz (2 – 0). Nevertheless, Alain Perrin may not have any better idea about which team to put out against the Red Devils. Were Cris, Fred and Mathieu Bodmer’s performances good enough for the Lyon coach to put them in the starting line-up even though none of them started in the first leg?
In his first competitive game since the 11th of August 2007, the Brazilian defender had to wait 3 minutes before he touched his first ball, after that his performance was impeccable. Will it be enough for him to expect a starting berth in 3 days time at Old Trafford? That is a question that will surely come up in the next few hours.
After a good showing against Metz last week, Mathieu Bodmer, kept that up against his former colleagues. Not long ago, Bodmer asked for more playing time in the middle of the park in order to show what he could do. He has more than shown his worth.
And what can we say about Fred, who scored his third goal in 2 games? Once again he was outstanding with his back to goal, and sharp in the penalty area, the Brazilian showed his worth by scoring the only goal of the game, in the same stadium in which he disappointed everyone last year in the final of the Coupe de la Ligue against Bordeaux. Lille are a good team for the « bullfighter » who now has a record of 4 goals scored in 3 games against the team from the north. Tonight a quickfire shot ,into the corner of Sylva’s net was enough for OL, lit up a rather tight first half. If this game goes down in the record books fo the 78 000 spectators, the first 45 minutes will not stay in the collective memory. Between the L1 leaders and a Lille side that were unbeaten in 10 games this first half was a damp squib. Apart from Fred who, before scoring, saw a header fly past the post in the 28th minute, only Bastos managed a shot on goal, which flew overin the 23rd minute.

The second half was much more worthy of the occasion. Lyon could have doubled the score early on but Benzema, alone against Sylva, could not hit the target in the 51st minute, running from his own half, Mathieu Bodmer made his way past the Lille defence only to screw his shot wide (56th). Sylva then saved a shot from Hatem Ben Arfa (82nd), who had come on in place of Benzema.

If this result gives OL’s ambitions at home and in Europe more weight on one hand, on the other it puts more pressure on Claude Puel’s men. They can only have themselves to blame though, waking up to the game too late and attacking only in the last half hour of the game. After Cris cleared off his own goal line an attempt from Frau (47th), the former Lyon player then went on to hit the bar (60th). Kluivert’s volley went wide of goal (64th), just like Tafforeau’s rocket shot (68th). Bastos saw his shots blocked by Bodmer (71st), caught by Grégory Coupet (84th) and fly wide (91st).

In getting past this difficult game against Lille, OL have put themselves in the best possible conditions to achieve the objectives they have set themselves. If OL manage to get through the Winter unscathed their Spring could be particularly joyful.
Videos
Facebook
Tweet
Forum
Videos