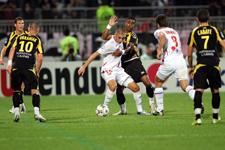 A game at the Stade de France for OL. A match against Lilli just before the trip to Manchester.This strange "away" game is still important…
Lille and Lyon will go into the record books by beating the highest attendance for a L1 game. The Stade de France wanted an event for its birthday an dit will be full. All we can hope for now is that the show will live up to expectations. Lille will play their home game away, it’s not the first time as they have done so in the Champions League before. The 6 times French champions will be playing an away game without it really being one. This isn’t such a bad thing as they have not won away from home since the trip to Rennes on the 24th of November 2007. Since then they have taken 2 points in 5 games, and have only scored 2 goals. During the same period, Bordeaux have been catching up, bringing home 10 points from their travels!

In the next 8 days, OL can change their season around, but they can also put it in danger and they know it. Lille, Manchester United and Bordeaux. What a trio!. Obviously the match against Lille is not the return leg of an important Champions League game, nor a direct confrontation with their national rivals. Lille just have a problem in the League. They are too close to the relegation zone for comfort and are in need of points. The kings of the draw, 14 in 25 games, are not a bad team. Far from it. Unbeaten in 8 matches having only conceded 4 goals, they have just played away to Bordeaux where the managed a 0 - 0. The recent arrival of Mavuba has helped tighten up the midfield. The former OL player Frau will want to put on a performance … by the way, his first goal for OL was against Lille. As for Kuivert, he will surely remember the two goals he has scored past Grégory Coupet. Both were during his time at Barcelona in 2001; one at the Nou Camp and the other at Gerland.

OL are going to Pars to take, we hope, all three points. They will then be able, whatever the outcome of the game between Bordeaux and PSG, to go into the game against Manchester full of confidence. With Bordeaux hot on their heels, there is no way that Juninho and his teammates will take this game easy. It would be surprising if Alain Perrin doesn’t put out a team close to the one that will start on Tuesday at Old Trafford. « If we had been further ahead in the League I would not act in the same way ». A question still remains : will OL stick to the same formation? Will Cris return to action? Grosso, will not start. He his being rested for the game against Manchester.

« I do not consider the match against Lille to be a preparation for the Manchester game. The title will be won with points taken away from home » according to Alain Perrin. It’s up to the players to do their utmost to win these three important points.
Facebook
Tweet
Forum