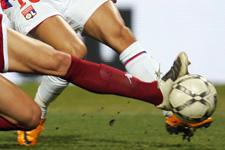 27 round in the League this weekend. The big game? Bordeaux versus PSG. Bordeaux want to keep in touch with Lyon and Paris want to put some space between themselves and the relegation zone…
Le Mans are quite invincible at the moment after a run of 4 games (3 wins & 1 draw). Le Man are hot on the heels of Nancy. Strasbourg who lost their last game at home to Sochaux are still far from being safe. Lens have hit a sticky patch which sees them drop to 17th place. Toulouse, who are in the first relegation spot are only 3 points behind Lens… just one win away.

Lorient continue their march towards safety and more if they are lucky. Nancy finally won again, with a victory over Lens. The team from the Lorraine are on the podium and are looking ahead but should also keep an eye on those behind them. Marseille took one point against Toulouse. They cannot afford to drop any more points at the Stade Vélodrome if they want to finish with a Champions League spot. Auxerre, knocked out of the Coupe de la Ligue, are on a 6 game unbeaten run in the League (12 points taken), including 3 good wins. They have given themselves a breath of fresh air as far as the standings go.

Metz gave a good showing of themselves at Gerland. At home they are in with a chance of recording their 3rd win of the season. Caen have not won for 7 matches and have a tendency to concede a lot of goals. Against the worst attack in the League will the Normans be able to turn things around? Monaco steadied the boat against PSG after their terrible display against Bordeaux. Back at home ASM wil have to take all 3 points if they want to achieve a European spot. Valenciennes haven’t done too well away from home. Will the Mediterranean air have a beneficial effect on the men from the North?

Sochaux brought home a win from their trip to Strasbourg. A win which gives them a bit of hope in their relegation battle. Now they need to win their game at home. Rennes also refound their smile against Lorient, but the Breton’s are still in a precarious position. An important game. St. Etienne appear to have refound their form just like their striker’s. Stuck in the middle of the table they can still hope for something from their season, they must remain careful though. Nice have not been doing too well recently and need a reaction if they want to stay in the top half of the table.

Bordeaux dropped 2 points at home against Lille. They now have no choice if they want to beat OL to the title. Bordeaux will play at home against PSG who have just made their way to the final of the Coupe de la Ligue, the team from Paris are not doing so well in the League and are in a relegation battle.