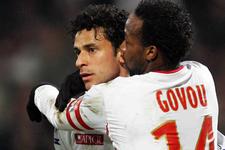 OL got the result they needed tonight, winning 2-0 thanks to two gaols from the Brazilian international Fred.
A gulf separates these two teams, only the colour « red » links them… Red the like the zone the future L2 team are in. Red, like the card shown to racism by all of the players in the L1 who wore t-shirts this evening with the slogan « Never again » on them …

A gulf of 40 points now separates Metz from Lyon after an encounter in which the result was never in any doubt. After nine minutes passed in the visitors half of the field, Fred announced the colour scoring his first league goal of the season which allowed OL a certain amount of breathing space whilst waiting for the result of Bordeaux’s game tomorrow. So were OL worn out? The game against Manchester left some marks and the changes that Alain Perrin made did their best to fight the fatigue that the team felt after the efforts put in in the Champions League.

The difficult task that had been set for Metz now looked impossible. All that was left to them was the desire to show what they could do, the pleasure of playing football and the hope of not become the holders of sad records. With this in mind, Pjanic tried his best, in vain. Babacar Gueye attempted to profit from the rare chances that came his way, without any more success.

His lay off to Renouard inside the penalty area could have been worth it’s weight in gold if the Metz player hadn’t then fired his shot wide (35th min.). A curling free kick from Pjanic saw Coupet push the ball onto his own crossbar (43rd). The international keeper, hardly called into action in the first half had kept a clean sheet, while his colleague in the Metz goal had suffered from the complimentarity of the OL forwards. Fred and Benzema often searched each other out with success and after a one-two passing movement it was Benzema who found Fred, the forward then firing past Marichez from close range (9th).

In the second half, Pjanic, played through into the box, could not hit the target (61st) and Gygax, right at the death, saw his attempt blocked by Coupet (90th).

Fred managed to double the score after a deep through ball from Mathieu Bodmer. Marichez came out well at the Brazilian’s feet but Fred had managed to lift the ball sufficiently enough to pass over the keeper, which allowed him show his delight in front of the 37 281 supporters.
Toulalan was less successful against the Metz keeper after a one-two with Benzema (63rd). It was at this point that the changes were made : Benzema, Källström & Govou came off for Keita, Juninho & Ben Arfa (70th). Metz felt soon enough this injection of fresh blood to the OL team, especially Marichez who saw his work doubled. Ben Arfa missing the target from 20 metres and from a shot/cross (75th, 80th) As for Juninho, he wasn’t far from scoring his 4th freekick against Metz, forcing Marichez to pull of a two great save’s (84th ; 87th).

OL had done their job with a team put together taking into account suspensions, rest and convalescence. Crosas suspended, Cris, Grosso and Delgado injured or ill all stayed at home. The objective was achieved against a team virtually relegated. All eyes now turn to the Chaban-Delmas stadium in Bordeaux to see just how much breathing space OL will have tomorrow.
Facebook
Tweet
Forum