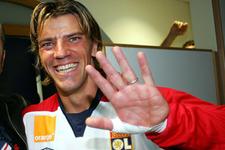 OL's international keeper will play his 500th game for Lyon on Wednesday…
« Time has flown by … ». Intertoto Cup, Uefa Cup, Champions League, Coupe de la Ligue, Champions Trophy, Coupe de France and of course the First Division (423 matches), « Greg » has done it all. During his time at Lyon, he has been called up at international level (28 caps). Against Manchester, he will put on the Lyon shirt for the 500th time. « It’s a big number, I’m very happy and proud but the most important aspect of the game against Manchester is how the team performs and the result».

It’s now eleven years that he has been keeping goal for Lyon. Since the start of January 1997, he has been part of the great Lyon adventure. He was part of every title winning team except the Champions Trophy in 2006. 5 Champions Trophies, 6 French titles, 1 Coupe de la Ligue. « The most memorable ? The first league title with all that surrounded the final match». Even if Grégory has a good memory, he admits that he doesn’t want to dwell on the past. « I’ll do that when my career is finished… then I’ll watch the games …» But when we ask him for some important moments, he’s more than willing to oblige.

His best save ? « People always talk to me about it. It was against Barcelona during the 2001-2002 season. It’s the kind of save you can’t work on in training (laughing). Apart from that one, since I came back from my knee injury it would be the one against St-Etienne ».

A gaff ? « I thought it would be the one against St-Etienne. Thankfully Karim equalised. The first one that comes to mind, the goal I conceded against Rennes at Gerland. You’re expecting to catch the ball and it hits your head after taking a weird bounce ».

A team-mate ? « Flo Laville, as far as I’m concerned he is the perfect defender. We met on international duty. Flo, he never let anything go. He had combatitive virtues that I really appreciate ».

An opponent? « Florian Maurice. Very difficult for a keeper to play against. With the footballs of today I think he would be all the more so ».

[IMG42905#R]A coach ? « I’ve had 5 (Lacombe, Santini, Le Guen, Houllier, Perrin). They are all different. I knew Mister Santini as a coach and in everyday life as his son is a friend of mine… I was so different compared to Paul Le Guen that it was instructive for me as well … »

A quality ? « Work, work, work. And I’m still working. There is desire as well and pride. I don’t like feeling weak, showing myself as weak. I can’t stand it».

A flaw? "For some it’s having played for St-Etienne".

The number of goals conceded ? « I don’t know. I think if I knew the exact number I’d be scared. But why look at it that way around. Why not look at the number of decisive saves, goal bound shots which were stopped … In any case, the goalkeeper is not the only one involved in either case ».

[IMG42906#L]The President Jean-Michel Aulas ? « It’s true, I’ve only known the one president at OL. First of all we have a confidence based relationship. He’s a winner who knows how to transmit his desire. A successful builder, who knows where he wants to go. His staying power and everything he’s won speaks louder than words. A deep respect ».

A wish ? « Good health and I know what I’m talking about. To beat Chiesa’s record (541 matches with OL)? We’ll see. Things happen so quickly in football ».

And finally, when we ask him how he feels after these 5 months away from the pitch, he is categorical. « I feel great. I’ve forgotten all about my knee. I’ve got all my sensations back. I have to keep working individually. As a team we need to stay more alert during games. I have to admit that certain comments that I’ve heard or read recently concerning who should be the French number one after my gaff against St-Etienne or my hesitation against Sochaux annoy me a little. It’s like they know everything, that they can explain anything … »
Videos