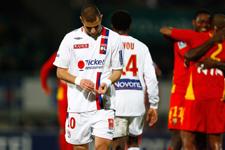 All this week, Lyon's players tried to speak as little as possible about Manchester, reminding everyone that before the European cup game they had an important rendez-vous with Le Mans.
Nevertheless, on the pitch of the Stade Léon Bollée, they gave a good impression of having their minds elsewhere. Lacking inspiration, seemingly without the desire or the force to react to proceedings the performance was more than below par. They needed a good performance to set them up for the game against Manchester, they failed. Defensively they needed to reassure, we’ll have to wait. They will have to play brilliantly and be defensively tight next time round.

The defence had, however, seemed to be well placed to bring back the first clean sheet in the league since the win away to Rennes on the 24th of November (0 – 2). One mistake changed all that, from a Camara cross, Yebda headed down to De Melo who fired past Coupet (71st). Up until then, Squillaci et al had more than capably dealt with the Le Mans attack. One after the other, Sessegon and Matsui had beaten François Clerc but were found lacking in their finishing (7th & 37th), De Melo missed with a header (12th), Toto Squillaci knocked out for a corner a wicked cross by Calvé (15th) and Coupet tipped over his crossbar one from Gervinho (22nd). In the second half, OL’s goalkeeper easily dealt with attempts by Romaric (64th) and Gervinho (68th).

On the other hand, with Fred out, suffering from a throat infection and Benzema on the bench, the Lyon attack was most certainly lacking a creative spark. The league leaders barely showed themselves in the first half, only two shots from Kim Källström blocked by the Le Mans defence (12th & 21st) ; an off target attempt by Hatem Ben Arfa (26th) and two free kicks from Juninho over the bar (32nd) and directly at Pelé (39th). After the break, the Le Mans keeper stopped a long range effort from Hatem Ben Arfa (49th) and De Melo blocked a back heal attempt by Boumsong (56th). More worryingly : after Le Mans opened the score Alain Perrin’s men did not create the slightest opportunity.

Even with Karim Benzema and Kader Keita coming on and the team changing to a 4 – 4 – 2 formation, OL were incapable of changing the match. On the contrary, Le Mans could have made the score even worse if they had been a bit more realistic in front of goal : Gervinho kept the ball when De Melo and Matsui were in the open (76th) ; Coupet caught a free kick from Romaric (81e) ; Sessegnon fired off target (84e) and Gervinho messed up a two against one break away (90th).

There is still hope despite the poor OL performance. Champions League games are more intense than a L1 game at Le Mans, the red of Manchester should give them more motivation than that of MUC 72. The more optimistic out there will remind everyone that OL lost to Caen before their unforgetable win against Glasgow Rangers. This non-match doesn’t necessarily mean that the game against Manchester United on Wednesday at Gerland will be a walkover, as this OL team contains as much talent as it does character. Hyde against Le Mans on Saturday, they have enough technique and flair to turn themselves into Jekyll at Gerland on Wednesday…
Videos