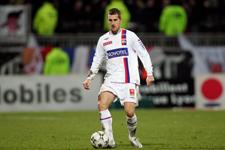 Reactions from the Lyon squad, staff and Chairman after the match against Croix-de-Savoie.
Jean-Michel Aulas : These type of games in the Coupe de France are traditionally very difficult. The pitch was barely playable, the public was convinced that their team was going to beat the big fish, the referees were being influenced by the public. Croix-de-Savoie have a good team as well. All these things put together gave our players quite a handicap. We had to show who we were, which we managed well in the second half. Greg (Coupet) had a great game, this match really is his, I am also happy that Fred managed to score his first goal of the season which can only help the team become stronger.
The plyers called up for the national team will leave directly this evening in a private het from Geneva, it is difficult mentally for them, we will also have to go and get them before the match against Sochaux. These situations are a handicap for the club, tonight we dealt with it all very well and that thanks to the players themselves.

François Clerc : It was difficult. The pitch wasn’t too clever and the game was tough but we’re through that’s the main thing. To have been knocked out would have been devastating. We’re still in the competition which is good, we’re happy and relieved. Often it’s small details that decide a match and tonight things went our way.

Fabio Grosso : they gave their all which made it a very difficult game for us. I love the Coupe de France because all the teams will fight like hell to try and win it.

Jean-Alain Boumsong : I twas good to be out on the field again and it is always good to start off with a win even if not everything was rosy. The playing conditions were poor but in a cup game the only important thing is winning the match.
I’d already played with Toto in the national side. Tonight things went pretty well even if we do still have to find our automatisms, thats something we’ll work on together.

Alain Perrin :i twas a typical scenario. A poor pitch levels the playing field completely considerably reducing the gap between amateurs and professionals, i twas very difficult to string passes together on that pitch. We did not manage to break them down in the 1st half and Greg kept us in the game with his saves. These are always difficult games. We have a very technically gifted team which needs to put a bit more aggression into its performances.. We played against a team here who were well organised, contained obvious talent and who stuck to their chalenge right up to the end, they should definately be applauded for their performance.
We are much happier to be facing a 1st Division team in the next round, we’re more used to the level, teams from the lower leagues are always difficult to manoeuvre
Videos