Next round : OL - Sochaux 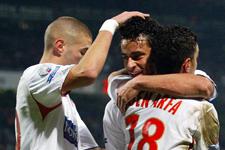 Lyon had to wait for the 80th minute and a Fred freekick to dispose of a plucky Croix-de-Savoie team. Through to the next round of the Coupe de France, Lyon will face Sochaux on the 19th or 20th of March at Gerland.
The goal was a long time coming for Alain Perrin’s men as they managed to score with only 10 minutes remaining on the clock, a goal right at the end of a second half that saw only 1 real goalscoring opportunity for OL, the freekick that Fred tucked away, the only other chance of any note was a header from Grosso that went well wide. The trap set by Di Tommaso and his teammates, on a poor pitch it has to be said, was not easy to get out of for OL. At the end of the day though the hope of winning a trophy that has eluded OL since 1973 is intact.

One week ago against Saint Etienne it was Benzema that saved his team with a freekick, against Croix-de-Savoie it was Fred that stood up to take the set piece, an exercise that is normally taken care of by Juninho, unfortunately the Brazilian missed out on the game as he has a broken toe. Fred was helped out by the Croix-de-Savoie goalkeeper Johan Durand who let the freekick squeeze through beneath his body.

Perhaps suffering from the inhabituel 4-4-2 line up (with 2 strikers Benzema – Fred,Govou & Ben Arfa on the wings), OL never really found the rythm necessary to surprise a well disciplined Croix-de-Savoie team who managed to put OL on the backfoot with their well worked counter attacks. The team from Haute-Savoie was more than a match for OL until they conceded, they even had the better goalscoring opportunities. First of all it was Perrin who, in the 2nd minute, worried Coupet with a missile from 25 metres out. Di Tommaso then put the ball in the net, but was flagged offside in the 4th minute. Coupet then kept his team in the game with three decisive saves, 2 one-on-ones against Perrin in the 23rd minute and Di Tommaso in the 43rd minute and a good stop from a shot near to his post from Perrin, again, in the 24th minute.

A draw seemed to be quite a flattering result at half time for an OL side that had hardly been dangerous at all on their rare excursions towards the opposition goal, Benzema hitting a shot wide in the 17th minute then hitting the post in the 19th. Fred saw a shot saved by Johan Durand in the 25th minute and Kim Källström who only managed to shoot wide in the 28th minute.

The expected reaction from OL was a long time coming, in fact it was the team from the lower division that became more difficult to get past and to stop, Coupet saving another shot from Di Tommaso in the 55th minute and then attempts from Bougli in the 68th minute Perrin which did not hit the traget. In stoppage time a final attempt from Coquio flew by the left hand side of Coupets goal.

OL did not show their best side with this performance, contenting themselves with the strict minimum, but who is to say that they will remember the difficulties they had in this match when they are lining up against Sochaux in the next round next month. The Coupe de France has a long history of matches won under great difficulty with success and happy endings coming after long moments of suspense. For now the adventure continues.
Videos