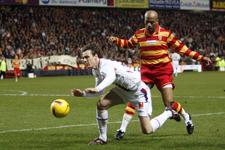 Check out who said what after the League defeat at Lens…
Toto Squillaci: Tonight we were guilty of losing the challenge, of going to sleep. We have to quickly rediscover our strength, our team spirit, our desire to keep on winning. This isn’t the Lyon that I know. We have no right to play the way we did tonight. We have to bounce back… and quick.

Jean-Pierre Papin: In four days we played the top two in the League for two 3-0 wins. We couldn’t have dreamed of better. Football is like that… it’s magical… one day you down and out, the next, you’re at the top of the pile.
Against a team like Lyon, motivation is not a problem. Les Lyonnais have probably been working hard towards the Champions League clash and were a little tired. But their strike force is scary and I can promise you that at the start of the match, we were scared.

Jean-Michel Aulas: Football matches are won and lost on little details. Tonight’s match turned bad. In the first half, OL was pretty much on top, playing its own football. But after the break we melted away. But at least before the first goal we were still in the match. That goal really upset our balance. Then there were things that happen in a game of football. We made some marking and positional mistakes. Lens probably wanted it more than us. But we mustn’t generalise about one loss. We have to analyse it for what it is truly worth. Without going overboard. Our league position remains unchanged. The most important thing now is the next match.

Grégory Coupet: It’s very disappointing because it’s a heavy defeat. We’re going through a rough patch, but we have to bounce back on Wednesday. We have to let the storm pass overhead and keep on working. Tonight we came of second-best in terms of ‘impact’. We struggled to impose our style. They were more incisive… we didn’t play to our usual standards. It’s time to turn towards the next game against Lorient, but it’s clear this result doesn’t do us any good…
Facebook
Tweet
Forum