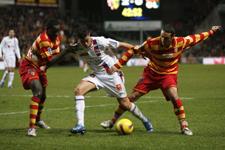 Away to Lens, OL suffered their second defeat of the week, 3-0, after their quarter-final loss to Le Mans. The champions now lead the Ligue 1 by just three points from Bordeaux…
OL’s two most recent matches, against Toulouse and Le Mans had already revealed a few defensive cracks, the odd moment’s loss of concentration which was punished each and every time. The voyage North to the Pas-de-Calais region confirmed the problem.
Alain Perrin’s side didn’t actually give away too many scoring chances, but each one they did was a perilous situation and almost certain goal.

In the first half, Grégory Couponly had one save to make, diving at the feet of Toifilou Maoulida (13’). In the second half, however, Perrin’s men served up four (huge) goal scoring chances to their hosts and were punished as a result… three times! From a Monterrubio cross, Maoulida got in front of Fabio Grosso to power a header past Coupet (55’, 1-0). And rather than sit back on their goal, Lens knew exactly how to hit OL on the counterattack and make the most of the spaces in Lyon defence. After Coupet denied Maoulida for a second time (64’), Bisevac then doubled the advantage, heading home Monterrubio’s corner (69’, 2-0). And Lens completed the rout in the final minutes through Mangane (89’, 3-0).

Against Toulouse, a week ago, Lyon was able to celebrate the attacking trio Juninho – Ben Arfa – Benzema. At the Stade Bollaert, Juninho was unavailable, replaced by Crosas, and his teammates that were present failed to produce their habitual performances, and this time there was no win to paint over the problems.

If the Brazilian’s absence deprived OL of fire power, especially from free-kicks, as he showed in the second half against Le Mans, but it doesn’t explain away the entire lack of attacking presence against Lens. Even if Lyon dominated large periods of the first half, Lens ‘keeper Vedran Runje remained largely untested. Karim Benzema hooked his effort (4’); and the Lens defence deflected the long-range efforts from Crosas (20’, 29’, 42’); Runje saved from Kim Källtröm (35’); Benzema couldn’t get on the end of Ben Arfa’s cross (37’); in the dying seconds of the first half, Benzema fired OL’s best chance over the bar (45’).

Doubtless stunned by Lens’ opening goal Les Lyonnais were less adventurous in the second 45minutes. After Ben Arfa had sliced through, Källtröm missed the target (59’); Grosso’s effort flashed past the post (77’); and Runje punched Ben Arfa’s powerful effort away (85’).

The coming week is of huge importance for Lyon. Before travelling to Saint-Etienne next weekend, they host Lorient to the Stade Gerland in three days. Three days for Coach Perrin to plug the holes at back and also rebuild the confidence of a side you to handing out lessons in football… not receiving them…
Facebook
Tweet
Forum