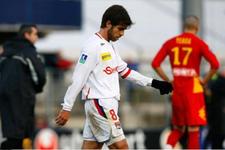 Olympique Lyonnais won’t get the chance to go one better in the Coupe de la Ligue, than they did last year. And now, if the French champions want to get their hands on a domestic cup, something they haven’t done since 2001, it will have to be the Coupe de France.
The fault of a valiant Le Mans side that, despite missing several regulars, was able to take the lead and then hold the Lyon attack at bay. The man star of the victory was Yohann Pelé who showed yet again that he is one of the leagues best shot stoppers.

Did the rescheduling of the game by 24 hours due to high winds provide a handicap to Alain Perrin’s side? OL certainly seemed to lack the cutting edge they displayed four days earlier against Toulouse. Beaten in the 50-50 challenges, lacking inspiration in the final pass, the Lyon players were too inconsistent to hope to break down the Le Mans defence.

Yet the opening exchanges were to the favour of the visitors. Jérémy Toulalan screwed his 25 metre effort wide (8’) ; Fabio Grosso missed the target with his free-kick (22’). OL seemed in control of the match but that was to quickly change. Les Manceaux opened the scoring with their very first chance as Matsui’s long range effort bounced just in front of Grégory Coupet before nestling into the back of the net (28’). Calvé and Co went close to doubling their advantage when the full-backs shot whistled past the post (32’) while Coupet was up to Coutadeur’s effort (34’).

Lyon fans had to wait until the end of the first half to see their side react. Pelé denied Benzema (39’) before Cleber Anderson’s header crashed against the post (42’).

The second half was largely dominated by the sextuple French champions. Aside from a Douillard free-kick (48’) and wide Yebda effort (84’), Grégory Coupet was margely untested. But some days things just don’t go your way and an in-form Pelé doesn’t make matters any easier. The Le Mans ‘keeper was on fire in the second half. He somehow denied a Squillaci header from point blank range (63’), saved from Benzema (65’) and Fred (82’), who replaced Baros. He then produced a wonderful save to deny an offside Benzema bicycle kick (88’) before finally punching a Juninho free-kick to safety (92’).

Yet despite the defeat, Les Lyonnais needn’t be alarmed. This loss hasn’t affected the club’s main priorities for this season. Of course, the chance to win a trophy in just four matches is an attractive proposition, but OL already have a very busy six months ahead of them…
Videos
Facebook
Tweet
Forum
Videos