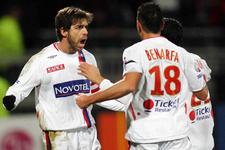 At the end of a match, in which they dominated from start to finish, Lyon defeated Toulouse 3-2… thanks to Nancy’s scoreless draw at Caen, OL now boast a six-point lead at the top of the standings…
Of course, six points isn’t a massive lead, and the championship isn’t over yet, but after last season’s difficult start to the New Year, les Lyonnais can congratulate themselves on a great match in which, at times, that were breathtaking going forward. Too bad if the final Toulouse push resulted in Fabinho’s 93rd minute consolation goal which took a little of the shine of what was a convincing victory.

Toulouse had recently taken a shine to playing Lyon. But on this night, they only looked the producing a repeat performance for nine minutes… no more. Nine minutes in between Anthony Réveillère’s unlucky headed own goal in the ninth minute and Lyon’s equaliser in the 18th. While Lyon were behind, Hatem Ben Arfa epitomised the side’s hunger to get back on level terms. And it was the number 18, after a neat one-two with Karim Benzema that did just that with a curling effort. Was it the midweek signing of Argentine César Delgado that motivated the young Frenchman? Whatever it was, he was superb throughout, showing off his skill, his dribbling ability and his shooting. After a 30m run with the ball at his feet, he drew a fine save from Douchez from just outside the area (27’).

To tell the truth, it was hard to understand just how Toulouse had been able to cause the French champions so many problems in their last four meetings. They showed very little apart from two efforts which failed to upset the returning Greg Coupet (Sirieix 3’ and Sissoko 36’) On the other hand, Benzema went agonisingly close in the 32nd and 34th minutes while Kim Källström’s shot flew wide (23’). Nonetheless, Elie Baup’s players remained in the match for nearly an hour before Juninho finally gave OL the lead in the 57th minute, beating Douchez with a trademark free-kick.

After Juni’s 12th goal of the campaign, Elmander and Co again went close to breaking. Toto Squillaci headed against the post in the 62nd minute before Benzema went one better a minute later, adding number three (63’).

But there was now closing up shop with the match all-but won and Lyon stayed on the attack. Ben Arfa’s shot shaved the crossbar (80’) and Loic Rémy saw his stinging effort punched away (86’). Alain Perrin decided to rest his scoring trio of Juninho – Benzema – Ben Arfa allowing, most notably, Anthony Mounier to earn his first professional cap.

Despite the festive atmosphere at the Stade Gerland, the final seconds were a little more stressful than they needed to be after chances to Arrache (63’) and Elmander (90’ and 93’), finally led to Fabinho’s late, late effort. But the result is there in black and white: after three league games without a win, OL are back to winning ways. Not before time with four matches in the next 11 days. But 2008 is certainly off to a good start…
Facebook
Tweet
Forum