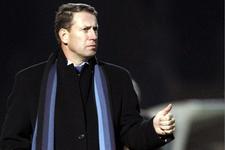 The match against Toulouse… back into League action… the transfer market… Alain Perrin broached all the big subjects during Thursday’s press conference…
Alain, OL is back in league action this weekend…
“Yes, and I haven’t forgotten that we’ve only taken two points from our last three matches. We need to get back into the rhythm. Last Sunday against Créteil was too easy. We need to start the year on the right foot in the league because, in terms of points, we don’t have that much of a lead to work with. But we have been working well at training.”

What do you think of the Toulouse squad?
“They’re a team capable of being patient, staying well organised and then count on Elmander who can prove to be the difference all by himself as well as bring his teammates into the game. We have a plan of attack designed to keep this strong, lively and opportunistic player under wraps. We need to stay focused, as well as wary… it’s never easy playing a team with their backs against the wall. Toulouse are a team that defeated PSG in the same type of situation as today. A feeling of revenge after the first match this season? (Smiling) A little bit, perhaps. We didn’t have much luck at Toulouse’s Stadium. The squad? Only one doubt at the moment… Clerc felt a little pain in his left thigh… but we’ll see.”

The Mercato?
“We had to replace the players that left. Now we need to integrate the new players and I can’t tell you how long that is going to take. They are quality young players who don’t speak French. We’re under no pressure to bring them straight into the squad and I’m not worried. Crozas is physically ready to go. While Delgado hasn’t stopped playing for a long time. We’ll keep working on the transfer window. I’m not hoping for anything in particular, I haven’t asked for any players. We’re overlooking the market with Bernard and Rémy, seeing what opportunities come up. Don’t forget that the return of Cris will be a great reinforcement. The squad is a little light on, but only for the moment… for the next two weeks. We’ll have the squad necessary to take on all competitions. A full-back? No. We can find internal solutions, but we don’t have those same solutions in midfield.”

Fred?
“He remains at the disposition of the club. He won’t be in the squad for the Toulouse match, but if he has to leave, I’ll pick him until he does. I’ll be having a chat with him shortly.”
Facebook
Tweet
Forum