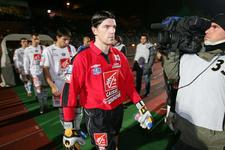 Check out who said what after the Lyon's 4-0 Coupe de France triumph away to Créteil in the round of 64...
Grégory Coupet: I’m delighted. The most important thing for me was to get my focus before the match… the old habits of getting ready for a match… the timing. I’ve been doing it for so long and I really enjoyed it today. I say it ironically, but in fact it’s partly true, “this is all I know to do”. It was also great to play with the team. I was a little disappointed by our second half because I would have liked it if we could have maintained our first half rhythm and enjoyed it more. For 2008? I wish everyone good health! Knees that keep working and the desire to keep moving forward. Croix-de-Savoie? I’ve got a bone to pick…!

Bernard Lacombe: Transfers? Nadir Belhadj has signed a three-and-a-half year deal with the Racing Club de Lens. Fred has almost reached an agreement with Paris… Fabio Santos could join Sao Paulo on a loan deal. We’re still working on Delgado (Cruz Azul), who is a similar player to Gava or Pires.

Alain Perrin: (Concerning the draw) It’s a derby all the same. As soon as you’ve been drawn against a lower league team you have to be on your guard. This Cup has been one of the club’s priorities for a while now. This is a dream competition and it’s been a long time that Lyon haven’t won it.
There was plenty of seriousness in our approach. We started with desire and that allowed Karim to show off his best side in scoring three goals. Toulouse? That’s a different level, a different challenge. But tonight bodes well for the upcoming matches.

François Clerc: Tonight, we did what we had to do. We had everything to lose playing this match. We got the hardest thing out of the way by scoring relatively early on in the first half. In the second half we just had to control things. We still on track in all competitions. But that could all change very quickly, so we’re taking every single match very seriously. 2008 has started well for us. The return of Greg? It’s good for the whole team.

Sandy Paillot: I’m delighted to have played tonight. I consider it a reward, because I’ve been on the bench for five or six matches now and I couldn’t wait for this moment. It was my first match since the Peace Cup so I really wanted to play well. I was pretty comfortable because I train with the players all the time. The Cup? We all want to win it.

Juninho: I developed a bit of a knack of scoring in the Coupe de France. Now I’d like to do it in the final because it’s a competition we haven’t won. We start 2008 with a 4-0 win and a very good first half. We’ve still got a long way to go and the return of several key players like Cris and Sidney Govou. The whole team showed it wants to produce a better month than January last year.

Doc Amprino
“ Sébastien Squillaci had a patella problem. We let him come off as a security measure because he was in more and more pain with each minute he played. But I don’t think it’s too serious.
“Jérémy Toulalan just strained the medial ligament he injured a few months ago. We decided not to risk him more than we had to given the way the match was going.”
Videos