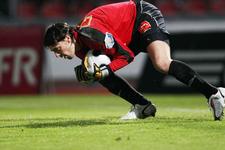 For Grégory Coupet's return to action, Lyon defeated Créteil 4-0 thanks to a hat-trick from Karim Benzema and a Juninho goal...
The romance and the magic of the Cup didn’t work for Créteil on Sunday evening. Each year the Coupe de France dishes up it’s fair share of surprises, but there was to be no upset when US Créteil Lusitanos hosted the French champions to the Stade Dominique Duvauchelle, for their last 64 clash.

The first match back after the Christmas break confirmed that the sextuple champs have lost none of their form… quite the contrary. This match in the Parisian suburbs revealed plenty of good news: after five months out of the game, Grégory Coupet returned to the Lyon goal. A gentle outing which his side dominated from start to finish. Greg, still had to make four significant saves, including a shot from Lavoyer (9’) as well as coming off his line well to defuse the danger (10’ & 20’). And he also chose the right way from Pancrate’s penalty, but the ball missed the target (78’).

Another positive, Karim Benzema is also still in form. He scored his first goal of the year from six metres out, with a left-footed finish from a Hatem Ben Arfa delivery on 15 minutes. After seeing his curling effort turned away by Cheik N’ Diaye (28’), the France international doubled the mark with his right-foot after a Milan Baros cut back. Juninho also go his name on the score sheet, finishing off a stunning one-touch team move to score his sixth Coupe de France goal. Juni taking the game beyond the hosts just seconds before Mr Cailleux blew for half-time (44’). Benzema then scored his second hat-trick of the season when he slotted home an 80th minute penalty.

A great start to 2008 for an OL side that never looked in danger and remains on course in all four competitions this season. Lyon’s next Cup game will be against Croix-de-Savoie in early February.
Videos