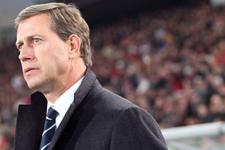 Alain Perrin's first press conference of the year saw the Lyon boss discuss the upcoming match against Créteil as well as the situation surrounding certain players...
Alain, how do you feel about this first match of the year?
“A Coupe de France match after the Christmas break is always tricky. We have to show we can focus. The Cup is always a chance for upsets and it’s never easy to play against side from a lower division.”

Is it understood that the Cup is one of Lyon’s priorities this season?
“I let the squad know it. I got a taste for this competition last season when I won it with Sochaux. I know it’s tough to go all the way and with Sochaux, it almost ended early against La Dûchere. Créteil? Bruno Génésio and Christophe Galtier watched them play in the league against Louhans. But a league game and a Cup match aren’t the same thing. Our opponents will be super motivated and wanting to create a surprise. It’s a trap.”

How has the preparation gone?
“It’s been enough. One week off doesn’t mean the players lose everything. The most important thing is not to underestimate our opposition. I feel the players know what they have to do and are motivated.”

A word on the absence of Fred and Keita?
“I’m not losing sleep over it. For me, they’ve got their reasons and I’m concentrating on the players I’ve got, that want to play. They’re not destabilising the squad. At any rate, Keita will be at the CAN as of next Monday. As for Fred, we’re following the soap opera. I’ve got no problem with him. I don’t try and get in touch with the players although Fred’s attitude is a little surprising. I didn’t think he’d be late and I don’t know what his intentions are, but I would quite happily continue working with him. Apparently he’ll be arriving on Sunday… What’s my biggest problem then? With Govou’s injury, I’ve got three attacking players out. Will I change back to a 4-4-2? It’s an option I’m considering.”

A word on the other transfer possibilities?
“I talked with Loïc Rémy. I don’t want him to leave. Delgado? The negotiations are continuing. This player can play on the left or right wing. It’s very promising. Belhadj? I didn’t want him to leave, but he should be joining Lens, the deal is almost done. If it goes through, Nadir won’t be part of the squad for Créteil. Then we’ll start looking for a replacement.”

The Créteil squad?
“I have 19 players for 18 places. Fabio Santos is available, even if he’s not yet match fit – he’ll be in the squad.”

Coupet?
“Barring any last minute disaster, Greg will be starting on Sunday. It’s good to have him back, even if he’s only at 97 per cent of his potential. But I’d take this chance to thank Rémy Vercoutre. He had to step in for a long time and it wasn’t easy. I haven’t forgotten his performances. He didn’t cost us any points, and he earned us plenty. As for Greg, his final three per cent will come with competition. He will also bring his personality to the table as well as his ‘keeping sills. But it’s not the return of Zorro.”
Videos