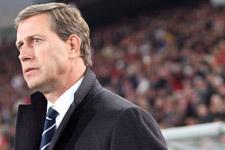 It was a tough return to the daily grind of L1 for OL after pulling off a European exploit in Glasgow. Just like last season, Lyon drew in its final home match of the calendar year, 0-0. After Monaco in 2006, it was Nice’s turn in 2007 to wrestle a precious point at Gerland.
Just three days after the triumphant trip to Glasgow, Alain Perrin decided to field the same starting XI that faced Rangers with the exception of playing Kader Keita in stead of Hatem Ben Arfa.

In the first half, the Lyonnais couldn’t manage to stay in Nice’s half for very long, and fittingly the first chance of the match went to the Aiglons, from a 20m free kick. Central defender Apam’s initial shot was deflected into the path of Bakari Koné, who missed the target by the narrowest of margins.

Lyon did the same less than 10 minutes later thanks to a fine move started by Karim Benzema on the left and finished on the right with a cut-back cross from François Clerc. Sidney Govou played the OL right back in behind the defence but Clerc was out of luck.

There wasn’t much else of note in a slightly lethargic first half. Both sides lacked inspiration and found it hard to link up with their strikers. Bu the fans at Gerland were soon drawn back into the match after the break with some hard tackling involving François Clerc and Cyril Rool, and then Cleber Anderson and Olivier Echouafni.

In the second half, the match intensified and OL managed to install itself in Nice’s half. Karim Benzema, hardly seen in the first half, was the first to distinguish himself. After linking up with Jérémy Toulalan, L1’s top scorer saw his daisy-cutter shot pushed wide by Hugo Lloris for a corner. The Nice keeper proved decisive on another two occasions, firstly when he pushed Juninho’s free kick onto the bar and then by safely stopping a corner that followed Sidney Govou’s header, by rising highest at the near post.

The introduction of Milan Baros, Hatem Ben Arfa and Mathieu Bodmer had little effect; in fact Nice soon came close to opening the scoring through a charging Bakari Koné, who latched onto François Clerc’s back pass. The pint-sized attacker rounded Rémy Vercoutre but couldn’t slot home from the angle he had created himself. Then the Ederson festival began, with the OL keeper forced to push a shot wide for a corner after the forward had rounded Ben Arfa, Toulalan, and Squillaci. A few minutes later, the Brazilian hit a stunning free kick onto OL’s crossbar. The rebound went straight up and down, causing OL some headaches before the ball was finally cleared.

The heroes of Ibrox, who were doubtless a bit exhausted after their midweek exertions, dropped two league points a week after losing in Caen. The fans at Gerland are still happy though, knowing their side will be back in Champions League action at the beginning of 2008.
Facebook
Tweet
Forum