The Lyonnais arrive in Germany 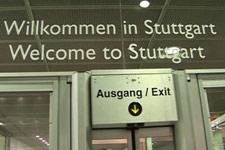 The Lyonnais arrived in Stuttgart on Sunday night after a noisy but uneventful flight… On Monday morning, it was well chilly on the banks of the Neckar…
Just before takeoff on Sunday, people were trying to find out who won the F1 GP as well as the result of the Nancy-Sochaux match. “Leave a bit of suspense. It would be good if Nancy could keep up with OL… to keep the league interesting.” While the OL set up would be happy with the result (a draw) there was one journalist, smiling, with some regrets.

A one hour flight with a deafening racket if you were sitting near the cockpit; one of the doors hadn’t been properly closed. Not such a funny situation. Once landed, OL made their way to the Schlossgarten Hotel in the centre of town, next to main station built in 1922.

And so the European routine began: a walk in the late morning; the press conference in the afternoon at VfB’s stadium; then training at about 18:00. In the local paper, the Stuttgarter Nachrichten, the German champions’ defeat in Hamburg was everywhere. “The relegation battle begins”. Striker Gomez vowed “(it was) One of the worst matches of my career”. In short, things aren’t great at VfB right now.

Sonny Anderson was at the match in Hamburg. “VFB heaped on the pressure at the start to try to score early. Once Hamburg scored, things got tougher for VfB, and then they had a man sent off… They were missing first-team regulars like Meira and Delpierre… I made my report to the OL staff.”

The players wait for the morning walk. Meanwhile Abdel, the physio, has gone for a run. Rémy Vercoutre wonders whether he’ll have a chance to see former Strasbourg team-mates Boka and Farnreud, while reliving some memories from Alsace…
Videos