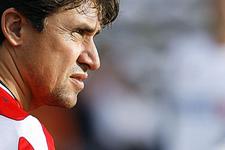 For Robert Duverne, this return to Germany will necessarily remind him of the last World Cup… He predicts a big match against Stuttgart on Tuesday night…
Robert, does this return to Germany and Stuttgart bring back good memories?
“Yes. The France team played its first match of the last World Cup here against Switzerland. That’s where it all began. I’ll think about it every time I come back to Germany. I remember the atmosphere at the stadium in Stuttgart. How could I forget… Passing by the hotel the France team stayed in did the same thing…”

Germany and OL
“There are good and bad memories. Among the good ones, obviously you have Munich, Bremen and Leverkusen… but we also had a heavy defeat in the UEFA Cup in Bremen. German football is always special.”

How do you see this match against VfB?
“It’ll be a huge match. Watch out in the first 15 minutes. I still think that behind Barça, OL and Stuttgart are the 2 best teams in the group. Rangers’ beating us 3-0 doesn’t make them any stronger. I hope Barcelona win in Scotland. I’m confident we’ll qualify; the team is playing better and better. Physically, the squad is in good shape. Despite what happens, we’ll have to be intelligent even if the Germans take the lead. Against Rangers, they could have scored quite a few goals. Like against Monaco. Goals for both teams on Tuesday night? It wouldn’t surprise me.”