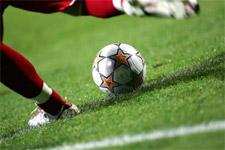 It was a reunion match. For their return to L1, the Olympiens maintained their winning ways and consolidated their position at the top of the table ahead of Nancy’s results tomorrow.
As for the principality club, their troubles persist. The international break had no effect on Ricardo's men, who were in the top half of the table after great start to the season. Since then however, ASM has slipped further and further, and it has now been 5 matches since they got a good result. It’s worrying, just like their 12th-place ranking and the thoroughly deflated confidence of the players.

However, the Monegasques started the match well, notably through Koller, quite at ease in his habitual role of centre-forward. The Czech giant lit up the opening minutes, using his strength to round Cleber Anderson, but his angled shot was wide of the mark. His positioning allowed the Monegasques to set up camp in the OL half for the first 10 minutes until Mr Kalt awarded Juninho a penalty, which the Brazilian duly converted a few seconds later (1-0). The game then tipped in OL’s favour, with Govou and Ben Arfa lighting up the flanks, allowing their captain to express himself on the edge of the ASM area. Roma stopped Juninho’s free kick in the 14th minute but then minutes later the Brazilian dribbled around 3 defenders before putting Anthony Réveillère clean through in a gap between defenders. The OL defender made no mistake and scored just his 2nd L1 goal with a right-footed shot from the edge of the area (18’, 2-0).

The reunions? Squillaci was up against his former club even though most of his former team-mates have moved on. ASM’s Berthod was up against his former club and team-mates Govou and Ben Arfa on the left wing while Monsoreau had his hands full in midfield trying to contain Juninho and co. After 20 minutes, the game was over even though “sly” gave the Monegasques a glimmer of hope, showing the OL fans of Gerland that his game was still in good shape. From a Meriem free kick, he reduced the scoreline before the break (41’, 2-1) after a half Ricardo wouldn’t have been happy with, despite efforts from Menez, who saw Vercoutre snaffle his left-footed effort (30’) and then Anderson turn his skidding shot wide for a corner (38’). Ricardo made his first changes at half time; Pinot and Bolivar made way for Perez and Leko. Monsoreau slipped back in to central defence.

Benzema, as is becoming his habit, scored again. All he had to do was be patient and take his chances, and this area Karim shines consistently. He played a one-two with Juninho but underhit his first shot (24’) then screwed his next one across the face of goal, not bothering Roma (30’) in the first 45 minutes. But the very first chance of the second half was the one! He moved wide onto the left flank to maintain possession , drawing 2 defenders before playing a one-two with Govou and then finding himself one-on-one with Roma. With his right foot, the France international scored his 11th goal of the season in as many matches (50’, 3-1). The goal capped off a great performance by the youngster, who has just been elected “Best goal scorer for September” in Ligue 1 Orange. The goal also put the final nail in the Monegasques’ coffin despite Ricardo’s tactical adjustments. A proud Benzema left the field to an ovation from the Gerland crowd, making way for the return of Fred, who hasn’t been seen in L1 since last May due to an injury he sustained against PSG.

At the end of the match, Cufré and Leko were yellow-carded; Ben Arfa shot across the face of goal (75’) and then failed to round the keeper (88’); Keita, alone in front of Roma, couldn’t manage a shot (84’) and Fred, his shot blocked on the edge of the area, couldn’t make the scoreline any heavier (89’).

OL, with 7 wins from its past 8 league matches, continued its winning ways in the best fashion ahead of the double-or-nothing Champions League fixture against VfB Stuttgart, who just lost 4-1 in Hamburg.
Facebook
Tweet
Forum