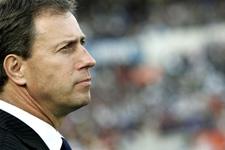 In his press conference Alain Perrin spoke about the performance of his internationals as well as the 2 big matches coming up…
Alain Perrin, did you follow OL’s internationals’ performances
“Of course. I was a bit worried about their picking up injuries, but it was okay. Sidney had a twinge in his calf, but the MRI didn’t show anything. Some of them had a lot of game time, others less. We’ll see how the ones who played are feeling now in terms of fatigue. Hatem? It’s great, his 2 caps are really good experience for him. As for the performances of Hatem and Karim, you have to remember football is a game of opposition, so you have to see it in context of the fact that Raymond Domenech chose them over many other players.”

Has the break been good for OL?
“Obviously it’s a bit of a shame to have a break like this. We just played a good game against Bordeaux. We just need to get our minds back on the job and deal with certain players’ fatigue.”

Monaco?
“We should be able to win at home against any opposition. But it won’t be easy. The Monegasques are having a rough time after having a good start to the season. They are European-level opposition and they have players with quality. They’ll play prudently even though they have some impressive strike power. I watched their match against Nancy; they were good, they’re ranked below their potential. Ricardo is an expert at closing down a game while waiting to pounce on the counter. So we’ll have to be careful not to concede first.”

Do you prepare for the Monaco and Stuttgart games at the same time
“Yes, even though the tactics will be different. In Stuttgart, I know the players they have who once played in France. There is also Gomez. They have a chance at qualifying – it won’t be a walk in the park for us in Germany.”

Fred?
“His return comes at a great moment. I didn’t need to see him play in the CFA. The faster he finds his feet in the first team, the better for everyone. He’ll need 2 or 3 matches, he needs game time. Could he start against Monaco? He’ll play, but I haven’t decided yet, especially because of Karim’s form. He’s played a lot, so resting him could also be a solution. A hierarchy? Everyone has their chance. I’m counting on everyone. Freshness for strikers is very important. Fabio Santos? It’s good to see him making an impression. You know there are no reserved places on the team. We have a squad.”
Facebook
Tweet
Forum