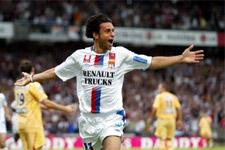 On Saturday, the Lyonnais will take on the Monegasques… here are a few souvenirs from recent instalments of the same fixture… No one has forgotten, for example, that Fred debuted against the Monegasques… and scored a double…
On September 10 2005, Brazilian Fred took his first steps in L1, scoring both of OL’s goals in the 2-1 win. His first came in the 6th minute and the second, a header, just after the break in the 49th minute, came from a Ben Arfa cross.

Juninho has scored 78 goals for OL but has never scored against Monaco.

Sidney Govou has scored fewer goals than the Brazilian, 65 in fact, and has also never scored against the Monegasques. Sid recently made it into OL’s top 10 list of all-time goal scorers after netting against Lille, overtaking Cavéglia and Kabongo.

Rémy Vercoutre will play his 11th L1 match in a row for OL against Monaco. He reached the same statistic at Montpellier in 2001-02, from round 1 through round 11.

Former Lyonnais Sylvain Monsoreau has secured 3 draws in his last 3 matches at Gerland: 2 with Sochaux and 1 with Monaco last season.

Manager Ricardo has twice come to Gerland as a manager, both times with Bordeaux, with a record of 1 draw and 1 win.