The Lyonnais shine with Les Bleus 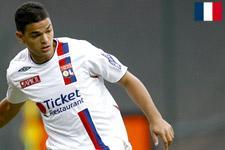 The OL players in the France team made a significant contribution to their country’s win over the Faroe Islands, scoring 3 of the 6 goals.
Karim Benzema scored a brace, taking his scoring record with the national team to 3 goals from 5 caps (just 110 minutes of playing time!). Hatem Ben Arfa celebrated his senior team debut by scoring the last of the 6 goals for the World Cup runners-up in stoppage time.
At the kick off, Jérémy Toulalan was the only Lyonnais on the pitch in Torshavn. At the break, Benzema came on for Anelka. Ben Arfa replaced Ribéry in the 63rd minute.

Nicolas Anelka also scored, as did Thierry Henry, who in so doing equalled Michel Platini’s all-time scoring record for Les Bleus, and Jérôme Rothen marked his return to the national set-up by putting his free kick past the Faroese keeper.

The win saw Les Belus leap the first of their 3 hurdles towards qualification for Euro 2008. On Wednesday, Raymond Domenech’s men will host Lithuania at La Beaujoire in Nantes.