The Numbers at the break 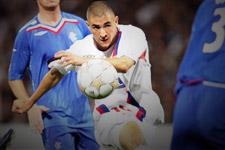 Now that the second international break of the season is upon us, we take a look at OL’s Numbers so far this season… Vercoutre has been the most-used player… Alain Perrin has made the maximum changes during matches… Benzema has proven unbelievably efficient in front of goal…
Players used

Alain Perrin has made 39 changes during games from a possible 39. Kader Keita had been subbed off the most times, 7 in all; Baros, 5 times; Govou and Juninho, 4 times… Belhadj is the OL manager’s preferred replacement, having been brought on 6 times, ahead of Ben Arfa and Clerc, both brought on 5 times.

The Olympiens have taken 195 shots, 61 of which have been on target, for 23 goals, including 21 in the league and 2 in the Trophée des Champions. In the league, Juninho and co have taken 138 shots for their 21 goals, getting their shots on target 45 times. Not a bad conversion rate! Their greatest number of shots for a game came against Rangers, when they tried their luck on 31 occasions… without scoring. Their smallest number of shots in a game came against Barcelona, when they had a meagre 6 occasions…

OL’s opposition have had 147 shots on goal, getting 56 on target and scoring on 16 occasions. Barcelona had 16 of those shots… Rangers 6. the two extremes.