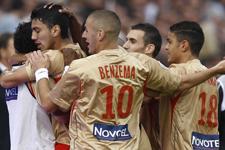 Over the last several seasons, the Lyonnais have built a reputation for never giving up on anything – especially their place atop the L1 standings. On Friday, however, Nancy raised the bar high with a resounding 1-3 win in Monaco.
In order to maintain their grip on top spot, the Lyonnais had to do equally as well. And they did so without faltering, dominating their match against an impotent Girondins outfit.

Alain Perrin’s men quite simply reduced L1’s 3rd-placed side, who have been harbouring ambitions of a top-3 finish to the season, to also-rans. And the Bordelais didn’t produce a merely average performance; it was, taking nothing away from OL’s performance, a sorry spectacle put on by Alou Diarra and co. Beaten in challenges, uninspired in attack, hardly better in defence, they were a far cry from the battling unit that beat Gérard Houllier’s men at the beginning of 2007. Put on the back foot by OL’s pressing game and finding it hard to win back the ball, they created a bare minimum of chances, jumbling their passing moves – the misunderstanding between Jussié and Fernando after Wendel’s wide free kick being a perfect example (45’). In the end they waited until the last 20 minutes to push up and finally cause the OL defence some headaches. Too little too late; Jussié reduced the deficit at the death but it changed nothing (86’).

On the other hand the Lyonnais linked up superbly and finished clinically as well as rediscovering the defensive solidity that left them on Tuesday night against Glasgow. At the start of the match, they made the most of the precision of Juninho’s free kicks. After Diawara fouled Benzema, the Brazilian placed the ball on the head of team-mate Cleber Anderson. Alone at the far post, the OL new boy made no mistake, nodding home past Ramé (5’).
The Bordelais had a lot of trouble just getting in front of Vercoutre’s goal, allowing the Lyonnais to impose their rhythm on the match. A dangerous mix! Juninho’s corner fell neatly for the head of Govou, who flicked the ball onto the thigh of Karim Benzema. The ball crashed onto the underside of the bar and… in, but the referee denied L1’s top scorer his 10th strike for the season (11’). But things were just getting started! Released into space by Hatem Ben Arfa, the young France international blasted a powerful shot past Ramé un just under the crossbar (23’).

At the break, the 2-goal advantage was never in danger as the 6-time French champions reduced their hosts almost to the rank of spectators: Wendel fired well over the bar on 2 occasions (38’ and 41’) and the dying moments of the first half, Fernando’s scuffed shot gave Vercoutre the chance to make his first save of the match (43’).

The Lyonnais even allowed themselves to miss some sitters . From distance, Kim Källström missed the target (12’). Juninho did the same with his 30m free kick (21’). Fernando stopped Benzema on his way to goal (26’). Released by a long ball from Juninho, Govou lost his one-on-one against Ramé (33’).

Laurent Blanc’s tactical changes at the break did nothing to change the face of the match, the second half continuing where the first left off. Hatem Ben Arfa mis-hit his shot after a one-two with Benzema (48’). After yet another Juninho free kick, Diawara once again failed to adequately mark Kim Källström who, alone on the 6-yard line, blasted past Ramé to widen the gap to 3 goals (60’).

In a late charge, the Girondins lifted their game considerably in the last 20 minutes, finally playing football more worthy of their status. Diawara headed over from Alonso’s cross (70’). Obertan forced Vercoutre to take 2 bites to save his shot (71’) and the referee failed to award a penalty for Toto Squillaci’s handball (75’). Jussié’s equaliser came too late to change the course of a match that had been set for some time (86’).

Five days after their heavy defeat at Gerland to Glasgow Rangers in the Champions League, the French champions rediscovered the taste of victory and a job well done. Thanks to their once-again solid defence, they managed to keep their European concerns from domestic competition and got off to the best possible start for the string of October matches that will have a strong bearing on their future…
Videos
Facebook
Tweet
Forum
Videos