Round 10 of the league 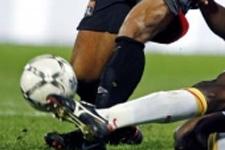 Round 10 of L1 this weekend with the big match between OL and Bordeaux, the Metz-Strasbourg and Lille-Valenciennes derbies and the big St-Etienne-OM clash…
European competition is now out of the way until the next round, except for Lens and Sochaux, who were knocked out on Thursday night. Before the international break, French clubs will enter into the second quarter of the season and the table is tightly packed in terms of point, much more so than at this stage last season. There are for example 5 points between front-running OL and last season’s runners-up Marseille… 10th-placed Sochaux is 13 points behind… On the eve of L1’s 10th round, not counting the postponed TFC-Nancy clash, there are 7 points between leaders OL and 10th-placed Lorient; the 5 sides directly below OL are separated by just 1 point. At the bottom of the table, things are much the same. No club has fallen a long way behind, and notable among them are the presences of Lens and Marseille. The 3 points up for grabs make predicting the state of the table after the weekend a difficult prospect.

Monaco has lost 3 in a row, somehow managing to turn around their strong start to the season. Perez and Menez are suspended. Can Nancy get a result at The Rock? They certainly can. The Verts don’t travel well, taking just 1 point from a possible 15 on the road, but are strong at home, where they have taken 10 points from the 12 on offer so far this season, which has kept them mid-table. OM pulled off a huge coup at Liverpool and now it just remains to be seen whether they can take that form with them back to L1. Albert Emon’s OM took just 1 point from its last 4 league matches. Can Eric Geret’s version stop the downwards spiral and escape the relegation zone?

Le Mans – Nice? An appetising match between 5th and 7th. The Manceaux have steadied the ship after 3 straight losses and are now coming off 2 consecutive wins (VA and Strasbourg). Nice struggles on the road, their only points so far coming from their trip to Marseille. The Lensois were knocked out of the UEFA Cup so will have all their attention back on the league, where they need points to rise above their lowly current ranking of 19th. Auxerre is doing better. They have secured 2 league wins on the trot and have made it to the next round of the Coupe de la Ligue, but are yet to open their account away from home. But that could prove difficult at the Bollaert!

There is also the northern derby between draw specialists Lille (7 so far this season), who are yet to win at home (3 draws and a loss) and Valenciennes, surprisingly ranked 4th, who have already taken a point from the north when they travelled to Lens. Will history repeat itself?

The Merlus have been collecting precious few points in recent times: 2 points in 5 rounds, including 0 at home since their win over OL. Caen has rediscovered its mojo after losing at home to Metz – they have recorded a league win and made it to the next round of the Coupe de la Ligue with a new formation. Metz won its last match, in Caen while Strasbourg lost at home last round to Le Mans. The Alsatians haven’t scored in their last 394 minutes played! Their strikers will be expected to break their ducks faced with L1’s worst defence…

PSG will do well to get a home win – they have 3 draws and 2 losses so far this season at the Parc! Will Pauleta be a starter? Rennes put an end to their strong start to the season by going down at home to Sochaux. The Bretons have qualified for the next round of the UEFA Cup. Sochaux, eliminated form the UEFA Cup, are still in need of points to edge out of the relegation zone. 1 draw and 3 losses at home? They need to set things straight by conceding fewer goals at home (8 goals conceded so far) and finding the back of the net more often (2 goals scored so far). Toulouse, won their European match in Bulgaria but lost one of their 2 postponed matches. They have taken 4 points from a possible 11 on the road so far.