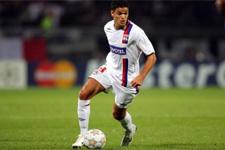 Hatem Ben Arfa discusses the disappointment of the loss to Rangers and reiterates his hunger for game time. “I’m a competitor,” he says, “I always want to play”.
When in training Hatem Ben Arfa beat Joan Hartock with a move of simple yet ingenious technical quality, the fans and journalists in attendance couldn’t suppress a murmur of admiration. Logically, when he met the press afterwards, the sublime moment was brought up straight away. “We’re in training to try things out,” he replied. “Then you just have to be able to reproduce such moves in matches because effectiveness in a competitive frame is the most important thing.” Just as he did against Metz to score his first goal of the season. It was a promising start, along with appearances as a substitute against Barcelona (15 minutes), Lille (19 minutes) and Rangers (30 minutes) a scratching against Lens…
So, necessarily, a player who loves to break free with the ball at his feet must be getting anxious to play more. “I’m close to being a starter. I’m 20 years old and I want to play. But even though it’s hackneyed phrase, it’s not me who decides who plays.”

He talks an ambitious and determined talk free of any hint of mutiny or insubordination against the OL manager: “I don’t see it as being unfair. Everyone knows I want to play. I’m a competitor. I always want to play, against any side; but there’s no problem with Alain Perrin. He simply makes his decisions.”

On Tuesday, he watched from the bench as his team-mates failed to shine against the Scots of FC Rangers. “Like everyone else, I was really disappointed. Losing 3-nil at home in front of your own fans is a tough experience. It hurts.” Hatem Ben Arfa is too young to have played in OL’s UEFA Cup and Intertoto Cup campaigns. His European experience is only at the highest level, away to Manchester, Milan and Barcelona. “ Personally, I hope to go further. The Champions League is the best club competition in the world. Sure, if we are relegated to the UEFA Cup, we’ll give it all we’ve got, but we have 4 matches remaining (in the Champions League). We’ll do our best to win and see what happens. Rangers will play Barcelona twice. It’ll be tough for them to take any points. So we have to stay optimistic even though it’ll be tough. In football, things can happen very quickly. We need to get going again and not hang our heads.”

And what better than a clash with Bordeaux, currently 3rd in L1, to dress their wounds? “We have to get right back on the horse. Against Bordeaux, we absolutely have to win but we can’t forget what happened in this match (against Rangers) just like that. It’ll take more than one match to forget a game like that one. It takes time, and many matches.”
Facebook
Tweet
Forum