Time for the A-game! 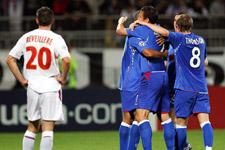 Some days you just want to forget. Matches where nothing works out. Tonight, OL suffered its biggest-ever home defeat in the Champions League, conceding 3 goals… and hitting the post 3 times.
‘Some days are just like that!’, Alain Perrin’s men will have to tell themselves to avoid becoming demoralised and to continue to believe in themselves. While hopes of qualifying for the last 16 of the Champions League haven’t yet evaporated completely, they are certainly being stretched fairly thin. For the rest of the group phase, the Olympiens will have to win every match and even then other results will have a strong bearing on their fate. Rangers have forced them into new ways of looking at the competition: having to win in Glasgow… and Stuttgart… and every other match as well.

In the last few weeks, Scottish footballers have been taking a wicked pleasure in making things tough for their French counterparts! Scotland’s win over France at the Parc des Princes 3 weeks ago was certainly still in everyone’s head. And the phantoms were strongest at the start of the match, as that’s when Rangers opened the scoring through McCulloch who, unmarked, blasted home Beasley’s assist (23’). What followed was a veritable descent into hell for the Lyonnais.

Despite a resolutely attacking attitude and possession stats in their favour, for 52 minutes, faced with a tightly packed Rangers defence, no Olympien in open play managed to get near Mr McGregor’s garden. A perfect example of the Olympiens’ inability to get into good positions in the area was when Fabio Grosso delivered a looping cross only to see the ball go out over the opposite touchline, finding no OL takers along the way (40’). Alain Perrin had however chosen a very attacking line up, giving starts to Karim Benzema and Milan Baros. But for a long while, neither the Frenchman nor the Czech managed to find a decent opportunity in the Rangers area. In the first half, the OL number 10 had to make do with just one chance, a shot from distance easily blocked by the Scottish keeper (20’). And it wasn’t much better for Baros who, to his credit, came close to pulling off 2 fine slalom runs behind the Rangers defence (10’ and 29’).

The OL manager’s other big choice: starting Källström in place of Toulalan. The Swede had a shot blocked by Hemdani (26’) and then fired wide (39’).
Other than that, the Olympiens were restricted almost exclusively to Juninho’s long-range efforts. Hemdani blocked his first shot (4’) and then the Brazilian’s free kicks flew narrowly over the bar (28’ and 35’). Then McGregor fisted Juninho’s shot clear with Benzema unable to steer his volley goalward (31’). Juni placed a corner on Anderson’s head (11’) then just before the break, hit the crossbar (45’), which was the turning point of the match.

The face of the game changed little in the second half. Juni fired wide once again (47’) while Baros finally managed to latch onto a ball in the area only to send it into the stands (53’). OL’s game was visibly developing but there was one big problem: Rangers doubled their advantage through Cousin (48’), and OL’s misery wasn’t over – from a cross from the former Lens man, Beasley beat Cleber Anderson and went on to wrong-foot Vercoutre from point-blank range (54’). And for the first time in ages, the fans at Gerland whistled at their own side.

Cowed and beaten, the Lyonnais continued to push forward but it was over as a contest before long, and the end of the match stretched on and on painfully for the fans for whom shots from Cleber Anderson (57’), Benzema (65’), Källström (65’), Govou (67’), Ben Arfa (80’), and Juninho (against the post)(70e) did nothing to console. In the dying minutes, McGregor stopped his hosts from reducing the deserved scoreline by saving from Ben Arfa and Juninho (84’ and 88’). And Cleber Anderson hit the post (85’)… Football is definitely not an exact science!

On Saturday against Lens, the Lyonnais scored 3 goals from 3 shots on target. The Scots must have watched videos of the match, giving the Lyonnais a taste of their own medicine… except in terms of territorial domination. Just like against the Artésiens, the Lyonnais didn’t slack off in terms of effort: the effort to plat good football, to use the wings, to shoot from distance when the area was packed with defenders. But for sure the demands of the French league are different from those of the Champions League… But from a 3-0 league win to a 0-3 Champions League drubbing at the hands of last season’s Scottish runners-up, there is an unimaginable gulf.

In Barcelona, the Lyonnais suffered their heaviest-ever Champions League defeat. 2 weeks later, they went down to a direct rival. They have to take inspiration from the chants of the North stand: “Never give up”, and take a leaf out of Arsenal’s book, the North London club qualifying for the knockout phase in 2003-04 after taking just 1 point from their first 3 matches. NEVER GIVE UP!
Facebook
Tweet
Forum