Not really any choice... 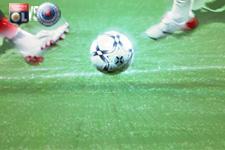 Defeated in their opening match against Barcelona, Les Lyonnais don’t have much choice when it comes to Tuesday’s match against Rangers, who defeated Stuttgart in their first match… the three points are imperative if OL want to qualify for the last 16…
Completely overrun in the domestic competition by Celtic last season, Ferguson and Co have made a better debut to the current campaign, even if they surrendered top spot in the League last weekend to their city rivals. The protestant club came through the last two qualifying rounds against Zeta Golubovci and Red Star Belgrade. They followed that up with a 2-1 win over Stuttgart and boast four members of the Scottish national team which defeated France last month: Ferguson, Hutton, Weir and McCulloch. But just how good are Walter Smith’s side? It’s hard to tell. They have other players we know such as Boyd, Cousin, Hemdani, Darcheville (doubtful)… but no real stars. Strong, physical, aggressive are the terms usually used to describe their football, while Ferguson showed against the French he has both the skills and the tactical know-how to pose problems.

OL went down heavily at the Camp Nou without demonstrating any of their traditional European savoir-faire (probably the most depressing thing about the 3-0 loss!). They have to fix that if they want to qualify for the knock out stages of the competition, starting with a perfect home record at the Stade Gerland – where they haven’t lost a group match since the visit of Ajax back in November 2003. All the more important considering the last group match is at Ibrox.

Since the trip to Catalunya, OL has played two home games for a draw and a win and returned to the top of Ligue 1. Cléber Anderson has assumed his place in the centre of the defence. Grosso was back at left-back… Fabio Santos played well against Lens… ‘Toto’ Squillaci seems to be back to his best… All of these ingredients should count for something on the continental scene. Of course we’re yet to OL operating on all cylinders for a full 90minutes. It will, once again, be up to Juninho to organise things in the middle and Benzema to do what he does best in front of goal. And, should he play, the Ivory Coast live wire Kader Keita I still waiting to set his right wing alight.

The sextuple French champions don’t really have any choice on Tuesday. Organisation, quality, efficiency, combativeness and desire… All the buzz words that have been part of European nights at the Stade Gerland since the 2000-01 season. So lets see them again against the Scots. Celtic have come twice to Lyon’s den and returned with their tail between their legs…
Facebook
Tweet
Forum