Lyon return to the top 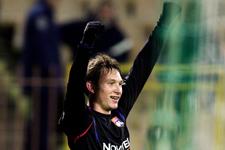 The aim was clearly stated before kick-off. And Les Lyonnais got what they were looking for before returning to Champions League action next week: they are back at the summit of Ligue 1…
Thanks to their 3-0 triumph over Lens, Lyon now lead Nancy, who have a game in hand, thanks to their superior number of goals scored. Three days before hosting Glasgow, and despite Lens’ lowly league position, the game was always going to be a good work out and the result is reassuring to say the least. Obviously Lens are not riding a wave of confidence and failed to react, even when trailing on the scoreboard, the positives are to be found elsewhere. Most notably, the Olympians were able to get a result against a side determined to sit back and never leave spaces for their hosts’ attackers… a situation which is likely to be repeated with the visit of Glasgow Rangers next Tuesday.

With one eye on Tuesday’s match, OL coach Alain Perrin decided to start Milan Baros alone up front to preserve Karim Benzema. The absence of Cleber Anderson, not qualified, forced Mathieu Bodmer back into the centre of the defence.

At kick-off, Lens boasted the best defence in the league and Lyon wasn’t expecting to create a wealth of scoring chances… nothing could have been further from the reality. If there has to be a negative aspect to Lyon’s evening, it must be that they didn’t kill off the match earlier – but to do that, you have to hit the target. Despite being under constant pressure, Lens ‘keeper Vedran Runje had to wait until the 90th minute to finally make a save from… Laurenti. Indeed, with three goals from the only three shots on target, Lyon certainly made them count. Baros’ shot-cum-cross ended up in the side netting (4’). Then, one-on-one against Len’s Croatian shot-stopper, the Czech hooked his shot wide (10’). Kader Keita fired high and wide. At the end of a brilliant run, Brazilian Fabio Santos missed the target (31’). Juninho’s free-kick flew just wide of Runje’s right-hand upright (35’).
br> Deliverance finally arrived moments before the break. Milan Baros, on the limit of offside, crossed low and hard across the face of goal for Fabio Santos. In tackling the ball home uncontested, the Brazilian not only opened the scoring, but scored his first ever goal in a Lyon shirt (43’).
b
Videos
Facebook
Tweet
Forum
Videos