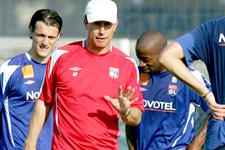 Alain Perrin faced up to the media after training on Friday. No question of over reacting…
Alain, was the team devastated by the defeat to Barcelona?
“Not to me that weren’t. There’s no mental problem. What the coaching staff has to say after a defeat like that is very important. We made a very positive analysis of the match in Spain, and not just to be nice. Quite simply, there were plenty of positives to take from the match. We took a step back and looked at things calmly. We had a big win at Metz, but not everything was perfect. We’ll keep working, concentrating, and we’ll keep looking to improve.”

Is there more necessity to get a good result againt Lille now?
“We’re playing at home. We want the three points. And there’s nothing more important than the three points. As far as I know, we can’t get six from one game! So I don’t see how we could be any more motivated.”

A word about Lille?
“They’re a hard team to play against. They are very well organised defensively and hit well on the counterattack. Physically, they are in good form and they play better away than at home. They have opened the scoring in numerous occasions. We’ll have to be careful. We’re obliged to make the running, but we’ll have to be careful. We have to be safe at the back. The opening of matches are always important.”

Will you be making changes?
“I’m thinking about it, because we spent a lot of energy against Barcelona. Cleber Anderson? He is available. He needs to play football. Perhaps the time is right. He is improving physically every day. I don’t see why I’d start him on the bench again. Either he’ll play with the reserves or play with the firsts. Bodmer in midfield? That’s also an option. Kader Keita? Starting him against his former club Lille is also part of what I’m thinking about. Everyone knows he hasn’t played as well as he can since joining OL. But you need to patient. His move here has changed a lot for him. We know he’s unpredictable. He just needs to find his marks and I’ve spoken to him several times to reassure him. OL is a new world for him and he has a certain status to defend.”