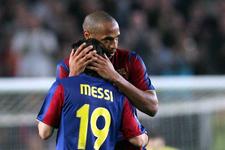 What were the Lyonnais lacking on the night? Three goals, obviously, and a lot more; possession: the Catalans had the ball 58% of the time; and space – the Lyonnais only enjoyed rare incursions towards Barcelona’s goal.
In the next few days, as they get back to work, Alain Perrin’s men surely won’t have too many regrets – there was a gulf between the two sides. Boxed in, inhibited and out-paced, the Olympiens managed to keep the scoreline at 1-0 for a long time before conceding in the final minutes. The scoreline is stark; it reflects the domination of Franck Rijkaard’s men on the tempo of the match and rewarded their simple and effective movement as well as the precision and vision of their passing moves. And it almost all came down to the inspiration and genius of one youngster with golden boots: Lionel Messi, who tonight really hurt the Olympiens, scoring 2 goals and putting his stamp on the entire match. Alain Perrin had decided to start Nadir Belhadj in the left of midfield, in front of Anthony Réveillère, to try to contain the young Argentine. Despite his precautions, however, Barcelona was superior in every department.

Fact: not all of them were at 100% in terms of preparation – Henry showed only glimpses of his legendary pace and acceleration and Ronaldinho’s presence in the game was sporadic. On the other hand, Lionel Messi lived up to expectations, playing a cut above the rest. Sure, the Lyonnais had been warned, but Messi somehow always manages to surprise. The Argentine is willing to try anything and often makes the difference with apparent ease. Jérémy Toulalan and Nadir Belhadj suffered bitterly on one of Messi’s incursions into the area. His centre was deflected by François Clerc for an own goal (21’). But the Argentine wasn’t going to leave it at that! After eliminating Bodmer, he beat Rémy Vercoutre but Clerc managed to clear his blistering shot off the line (38’).
At the break, the 1-goal advantage seemed merited, as Barcelona had monopolised possession and pushed the Lyonnais around the park, making them look lost on the huge field. From the outset, Abidal was up to his old tricks, delivering a curling cross that flew across the face of goal with no Blaugrana takers (6’). Yaya Touré fired over (7’) and Toto Squillaci managed to stop Ronaldinho from getting clean through on goal (17’). Alone in front of Vercoutre, Lionel Messi over-hit his lob (47’) and Thierry Henry fired wide (53’).

The Catalans took their time in killing off the match, mainly due to an inspired Rémy Vercoutre. The OL keeper managed to keep the Catalans at bay for a considerable time. He punched clear shots from Deco (12’ and 64’), won his one-on-one with Thierry Henry (68’) and then cleared another shot from Deco with his foot (71’). After stopping the Portuguese yet another time (77’), he could do nothing to stop Messi’s angled shot after the ball was served to him on a silver platter by Iniesta (82’). IN stoppage time, Thierry Henry found himself unmarked on the 6-yard line and had a simple tap-in after Vercoutre had repulsed Giovani’s shot (90’).

What about the Lyonnais, you might ask? Despite being motivated and driven, the numbers don’t add up to much. Only Kim Källström from a corner (30’) and Govou with a header (58’) managed to cause Valdes the slightest amount of trouble.

At full time, the numbers weren’t completely alarming. The competition has just begun and it’s even tougher away from home. Also, it’s not certain that the Lyonnais were counting on collecting any points in Catalonia in order to make it through the group phase. But they will need to show another side of themselves when Rangers come to visit Gerland in a fortnight’s time. But the players should be encouraged – you don’t play Barcelona every day. OL had been on a run of 13 undefeated group matches in the Champions League, but come on, Olympiens! The road to qualification is a long one…
Facebook
Tweet
Forum