A look around the papers: September 19 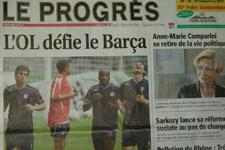 September 19: a look around the papers.
L’Equipe’s headline: “OM on track”. The Marseillais pointed the way ahead for the Lyonnais.
Sébastien Tarrago notes that “for once OL’s passage through to the last 16 doesn’t seem a foregone conclusion”.
Vincent Duluc provides parallel portraits of Lionel Messi and Karim Benzema, both born in 1987 both youth academy products of the clubs where they now play, which puts their duel, with its talent and virtuosity, at the heart of the match.
Claude Chevally addresses the memories left by Eric Abidal in the OL dressing rooms: “the high-volume life of the party and the prankster”. And to get over it? “It’s tough but doable,” confides Hatem Ben Arfa.
The sports daily closes with a long interview with Thierry Henry, who discusses his current form: “I feel like I’m playing on one leg,” he admits. Information or misinformation?

Aujourd’hui en France – Le Parisien both thrust Karim Benzema in to the limelight. Marc Benoist claims that “against Barcelona tonight, he will face a massive test”.
Ample column inches are devoted to Eric Abidal’s press conference the night before he faces up to his old team-mates. “It’ll be weird but I have to give 100% for my new club. My objective will be the same as it has always bee: to be stronger than my direct opponent in every challenge.”

“OL defies Barça” is the headline for Le Progrès. The regional daily notes that “against an adversary still finding its feet, OL has a lot to play for at the Nou Camp tonight,” but warns that “the danger from Barça’s Dream Team is ever-present”.
Antoine Osana has a portrait of “France’s best young player”: the inevitable Karim Benzema.
Christian Lanier delivers a potted history of the Catalan club, focusing on their 2 Dream Teams that won the Champions League in 1992 and 2006. He also notes the club’s strong regret at having let Ronaldo go after just one season, in which he scored 39 goals in 44 games. Beware Barcelona: Ronaldo is the idol of one Karim Benzema…
Facebook
Tweet
Forum